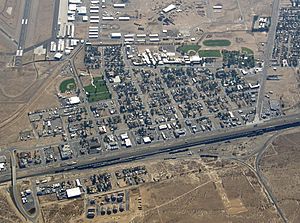 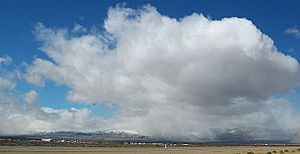 Mojave (formerly Mohave) is an unincorporated community in Kern County, California, United States. Mojave is located 50 miles (80 km) east of Bakersfield, and 100 miles (161 km) north of Los Angeles, at an elevation of 2,762 feet (842 m). The town is located in the western region of the Mojave Desert, below and east of Oak Creek Pass and the Tehachapi Mountains.

The town of Mojave began in 1876 as a construction camp on the Southern Pacific Railroad. From 1884 to 1889, the town was the western terminus of the 165-mile (266 km), twenty-mule team borax wagon route originating at Harmony Borax Works in Death Valley. It later served as headquarters for construction of the Los Angeles Aqueduct.

Mojave Airport: aviation and military use

Located near Edwards Air Force Base, Naval Air Weapons Station China Lake, and Palmdale Regional Airport, Mojave has a rich aerospace history as well. Besides being a general-use public airport, Mojave has three main areas of activity: flight testing, space industry development, and aircraft heavy maintenance and storage. The closet airfield to the city, formerly known as the Mojave Airport, is now part of the Mojave Air and Space Port.

In 1935, Kern County established the Mojave Airport a half mile east of town to serve the gold and silver mining industry in the area. The airport consisted of two dirt runway, one of which was oiled, but it lacked any fueling or servicing facilities. In 1941, the Civil Aeronautics Board began improvements to the airport for national defense purposes that included two 4,500 x 150-ft. asphalt runways and adjacent taxiway. Kern County agreed the airport could be taken over by the military in the event of war.

Following the Japanese attack on Pearl Harbor in December 1941, the U.S. Marine Corps took over the airport and expanded it into Marine Corps Auxiliary Air Station (MCAAS) Mojave. The two existing runways were extended and a third one added. Barracks were constructed to house 2,734 male and 376 female military personnel. Civilian employment at the base would peak at 176. The Marines would eventually spend more than $7 million on the base, which totaled 2,312 acres.

With the end of WWII, MCAAS was dis-established on Feb. 7, 1946; a U.S. Navy Air Station was established the same day. The Navy used the airport for drone operations for less than a year, closing it on Jan. 1, 1947. The base remained closed for four years until the outbreak of the Korean War. Mojave was reactivated as an auxiliary landing field to MCAS El Toro. The airport was recommissioned as a MCAAS on Dec. 31, 1953. Squadrons used Mojave for ordnance training when El Toro had bad weather. Marine Corps reserve units were temporarily deployed to Mojave for two week periods. MCAAS Mojave personnel peaked at 400 military and 200 civilians during this period.

In 1961, after the USMC transferred operations to MCAS El Centro, Kern County obtained title to the airport. In February 1972, the East Kern Airport District was formed to administer the airport; EKAD maintains the airport to this day. To a great extent EKAD was the brainchild of Dan Sabovich who heavily lobbied the state for the airport district's creation and ran EKAD until 2002.

On November 20, 2012, the EKAD Board of Directors voted to change the name of the district to the Mojave Air and Space Port. Officials said that the spaceport name is well known around the world, but EKAD is not. The change took effect on Jan. 1, 2013.

The airport is now the home of various aerospace companies and institutions such as Scaled Composites and the civilian National Test Pilot School. The town was home to the Rutan Voyager, the first aircraft to fly around the world nonstop and unrefueled. The airport is also the first inland spaceport in the United States, the Mojave Air and Space Port, which was the location of the first private spaceflight, the launch of SpaceShipOne on June 21, 2004. In the fictional Star Trek universe, it is the home town of Captain Christopher Pike.

For statistical purposes, the United States Census Bureau has defined Mojave as a census-designated place (CDP).

All content from Kiddle encyclopedia articles (including the article images and facts) can be freely used under Attribution-ShareAlike license, unless stated otherwise. Cite this article:
Mojave, California Facts for Kids. Kiddle Encyclopedia.