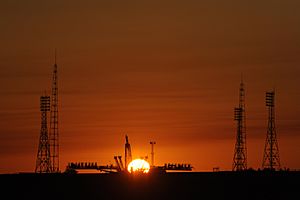 A spaceport is a place for spacecraft to launch or land. It may have launch pads for rocket-like spacecraft, and many buildings for preparing and launching space flights. In real life, there are very few space ports across the world. They are mostly owned by government agencies (like NASA), and used to launch scientific research missions and to launch man-made satellites.

However, science fiction stories set in the future often have spaceports that are more like modern airports. In these stories, many spacecraft may come and go each day, and they may transport passengers like a real-life airline.

All content from Kiddle encyclopedia articles (including the article images and facts) can be freely used under Attribution-ShareAlike license, unless stated otherwise. Cite this article:
Spaceport Facts for Kids. Kiddle Encyclopedia.