National City is a city located in the South Bay region of the San Diego metropolitan area, in southwestern San Diego County, California.

For thousands of years, the Kumeyaay people, also known as Tipai-Ipai and later Diegeño, lived peacefully and prospered in San Diego County's moderate climate. The area known as National City today was part of the Kumeyaay's ancestral territory which ranged east to El Centro, north to Escondido, and south into Baja California. The Kumeyaay were skilled hunters and innovative agriculturists. The Kumeyaay established their rich cultural identity and traditions, many of which are still practiced and honored today. The Kumeyaay first encountered Europeans with the arrival of Juan Rodriguez Cabrillo in 1542 in what is now San Diego. By the year 1769, when Spanish soldiers and missionaries, led by Father Junipero Serra, founded the Mission San Diego de Alcalá and the Presidio of San Diego, the destruction of the Kumeyaay way of life had irreversibly begun. By the late 18th century, Spaniards entered Tipai-Ipai (Kumeyaay) territory, bringing with them non-native, invasive flora, and domestic animals like horses and cattle, which brought about degradation to local ecology.

The Spanish named the 26,000 acres (11,000 ha) of land El Rancho del Rey (the Ranch of the King), used by Spanish soldiers to graze horses. After independence from Spain, in 1810, the Mexican government renamed it Rancho de la Nación (Ranch of the Nation). Governor Pío Pico granted Rancho de la Nación to his brother-in-law John (Don Juan) Forster in 1845. President Andrew Johnson, in issuing the land patent, listed the name as simply "The National Ranch", the English translation of the land grant name, "Rancho de la Nacion".

In 1868, Frank Kimball and his brothers Warren and Levi, contractors and builders from San Francisco, purchased the entire rancho and thus began the foundation of the city, retaining the National name.

Frank Kimball first brought novelty and change to the area by building his personal residence. His home included a bathtub as well as hot, running water, making it the first modern house in the entire county. However, it was more than his personal innovative endeavors that allowed the region to flourish. By constructing the first roads and railroad in what is now National City, Frank and his brothers most notably were responsible for introducing modern transportation to the residents of the community. The brothers also implemented the area’s first post office and a wharf for sea-bound imports and exports. These large ventures, coupled with smaller personal missions, both contributed to the overall goal of creating a community unparalleled to the times. A lasting mark of the Kimballs was the trees they imported and planted from Europe and Asia, accomplished via a partnership with the U.S. Department of Agriculture. These trees can be found dotted throughout the city to this very day. It was the passion and influence of the Kimballs as well as other early pioneers that made way for the city’s incorporation on September 17, 1887.

According to the United States Census Bureau, the city has a total area of 9.1 square miles (24 km2). 7.3 square miles (19 km2) of it is land and 1.8 square miles (4.7 km2) of it (20.17%) is water. National City is bounded by San Diego to the north and northeast, Bonita to the southeast, and Chula Vista to the south across the Sweetwater River. San Diego Bay lies to the immediate west of the city. Also, within the boundaries of National City on the eastern side of town is the unincorporated area of San Diego County known as Lincoln Acres. National City is 15 minutes away from the US–Mexico Border (Tijuana).

National City has road access by the Interstate 5, Interstate 805, and California State Route 54, in addition to surface streets. National City Blvd, which once served as part of the historic U.S. Route 101, still serves as a north–south arterial street parallel to Highland Ave. Plaza Blvd and 30th Street/Sweetwater Road serve as east–west arterial routes. It has rail access through the San Diego Trolley's Blue Line. The nearest commercial airport is San Diego International Airport.

In 2012, National City was honored as the most walkable city in San Diego County. It currently holds a walk score of 71, among the highest scores for cities of similar size. However, its current score also puts National City among bigger cities like Seattle, Washington (74) and Portland, Oregon (66). San Diego's current walk score is 56.

Although there are no specific communities identified by the city of National City, certain areas have self-identified as communities. The Old Town community is virtually bordered by McKinley Ave (to the west)and National City Blvd (to the east), and 24th street (to the south) and 8th street (to the north). While Lincoln Acres is an unincorporated area of San Diego County, it is located wholly within the boundaries of the incorporated city of National City and both share the postal code (91950). The South Port Business Center, an industrial park in which many businesses operate, is bordered by I-5 to the west, National City Blvd to the east Mile of Cars Way (24th street)to the north, and W 28th street to the south. The residents near Las Palmas and El Toyon parks have neighborhood councils where they can voice their concerns with the city's elected officials.

The Neighborhood Council Program was developed in an effort to improve communication with the community and to bring services directly to National City residents. The program helps to unify neighbors to further enhance the image of ther city, instilling civic pride into neighborhoods. Regular monthly meetings are held in each of the three Neighborhood Councils. Agenda topics are driven by resident requests, current events, and a desire by city officials to keep residents abreast of new programs and upcoming developments. Meetings are usually attended by police and fire officials, as well as members of the City Council.

Besides attending regular meetings, Neighborhood Council participants assist the city in improving their neighborhoods by volunteering during clean-up and beautification events and by helping to reduce crime. Residents also participate in family events sponsored by the Neighborhood Council Program such as National Night Out and Movies in the Park, as well as other city-sponsored events.

National City’s climate is characterized by warm, dry summers and mild winters, with most of the annual precipitation falling between December and March. The city has a mild climate year-round, with an average of 201 days above 72 °F (22 °C) and low rainfall (9–13 inches [23–33 cm] annually). Frequently, particularly during the “May gray/June gloom” period, a thick “marine layer” cloud cover will keep the air cool and damp within a few miles of the coast.

Like most of Southern California and the San Diego County region, the majority of National City's current area was originally occupied by chaparral, a plant community made up mostly of drought-resistant shrubs. National City's broad city limits encompass the San Diego National Wildlife Refuge and the most northern area of the Sweetwater Marsh National Wildlife Refuge. The Sweetwater River runs from the Cuyamaca Mountains, through National City and Chula Vista via a flood control channel (natural route as opposed to a canal) and empties into the San Diego Bay. Most of west National City is flat with an average elevation of 72 feet (22 m), which made it historically desirable and well suited for the Spanish to graze their horses. The eastern areas of National City tend to have canyons and ridges with an existing wildlife. 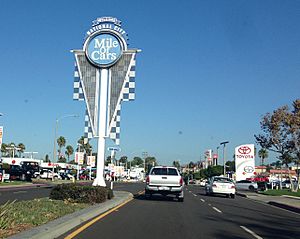 Entrance to the Mile of Cars 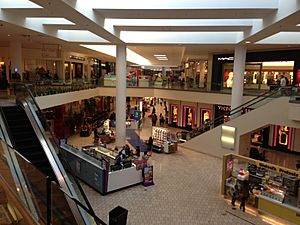 Inside the Westfield Plaza Bonita 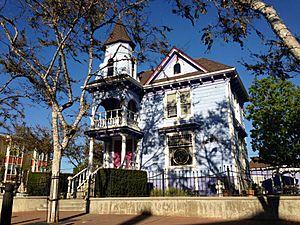 House in the Historic District near Mile of Cars

Former Mayor Nick Inzunza declared National City an immigrant sanctuary city on September 30, 2006 in a proclamation he presented to immigrants' rights activists during dueling rallies that brought about 400 people to City Hall. This was the result of a statement Mayor Inzunza made on National Public Radio on September 8, 2006. This proclamation divided the city between the stance of the ex-mayor and the federal and state regulations regarding this matter.

On November 7, 2006, Ron Morrison was elected mayor of National City. On November 28, 2006, Mayor Morrison appeared on the KPBS program Full Focus with Gloria Penner and was asked if National City will continue to be a sanctuary city for illegal immigrants. Morrison responded, "absolutely not". 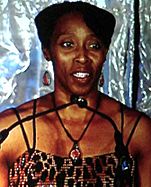 According to the city's 2010 Comprehensive Annual Financial Report, the top employers in the city were:

In August 2005, the National City Public Library opened the doors of its newly built, 49,508 sq ft (4,599.4 m2) state-of-the art facility. The library offers more than 160,000 books and has one of the largest computer centers in the State of California's public library system with over 60 computer units.

On December 18, 1884, Frank Kimball opened the city's first public library in his own home. In April 1884, the library was moved to the downstairs room of Granger Hall on National Avenue. In 1895, it was moved to the Boyd Block, currently McKinley and visually, 16th Street. From 1911 to 1954, National City operated its Carnegie Public Library in the present site of the National City Civic Center. The library operated in the present day Art Center since 1954 until the opening of the new location in 2005.

All content from Kiddle encyclopedia articles (including the article images and facts) can be freely used under Attribution-ShareAlike license, unless stated otherwise. Cite this article:
National City, California Facts for Kids. Kiddle Encyclopedia.