Nissan (In Japanese: 日産自動車株式会社; Nissan Jidōsha Kabushikigaisha) is a car company from Japan. In the United States it was previously called Datsun. They also make the Infiniti cars. It has a partnership with Renault. 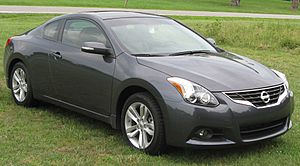 All content from Kiddle encyclopedia articles (including the article images and facts) can be freely used under Attribution-ShareAlike license, unless stated otherwise. Cite this article:
Nissan Motor Company Facts for Kids. Kiddle Encyclopedia.