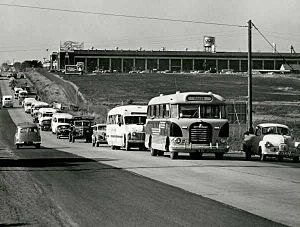 The Ford Motor Company of Australia Limited, known by its trading name Ford Australia, is the Australian subsidiary of United States-based automaker Ford Motor Company. It was founded in Geelong, Victoria, in 1925 as an outpost of Ford Motor Company of Canada, Limited. At that time, Ford Canada was a separate company from Ford USA. Henry Ford had granted the manufacturing rights of Ford motor vehicles in the British Empire (later the Commonwealth), to Canadian investors.

Ford Australia's first products were Model Ts assembled from complete knock-down (CKD) kits provided by Ford of Canada. It is best known in more recent times for having produced the Falcon from 1972 to 2016, originally a US model introduced in Australia in 1960, but adapted to Australian requirements and road conditions. 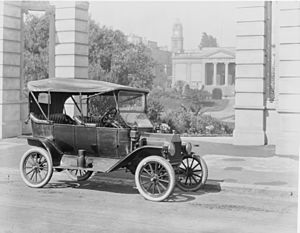 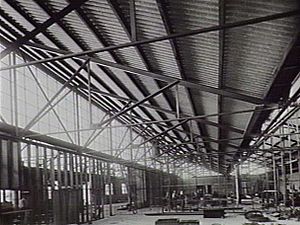 The Ford Australia plant under construction in Geelong, 1926.

On 31 March 1925, Ford announced that Geelong, was to be the Australian headquarters. The first Australian-built Ford was a Model T that came off an improvised production line in a disused Geelong wool storage warehouse in June 1925, while work started on a factory in the nearby suburb of Norlane. In 1928 the factory switched to the Model A and was followed by the Ford V8 in 1932.

In 1934, the company released a coupe utility based upon the Model A American Ford "Closed Cab Pickup Truck" that had been produced for 6 years from 1928. The local designer was Ford engineer Louis (Lewis) Bandt. During the Great Depression, banks would not extend credit to farmers to purchase passenger cars- in the belief they were unnecessary luxuries. However, they would lend money for the purchase of "working" vehicles. The coupe utility fulfilled the need of farmers to have a workhorse which could also be used "to take the wife to church on Sunday and the pigs to the market on Monday".

In 1956, the company bought a large tract of land in the northern Melbourne suburb of Campbellfield, and in July 1961 announced that the new Melbourne factory would become the company headquarters.

Ford Australia was one of Ford's five product development centres globally. It now fully imports cars and trucks for the Asia/Pacific region after the closure of its Australian operations. It was expected to retain about 1300 workers in Australia.

In 2009, the parent Ford company, seeking to avoid the Chapter 11 bankruptcy that had already befallen General Motors and Chrysler, began abandoning overseas projects. Around July 2009 Ford Australia had received permission from Detroit to add a new small car to its Falcon production line. On 23 May 2013, Ford Australia announced that it would exit the Australian market after 88 years due to uncompetitive manufacturing costs and lacklustre sales. The carmaker's annual financial report, for the previous year, showed a loss of A$141m dollars (£90m/$136m) after tax for the 2012 financial year. This followed a loss of A$290m in 2011 and a total loss of A$600m over the preceding five years, as a result, 1,200 staff would lose their jobs.

Ford had two main factories, both in Victoria: located in the Geelong suburb of Norlane and the northern Melbourne suburb of Campbellfield. The Ford Discovery Centre, a museum of the history of the Ford Motor Company in Australia that was also located in Geelong, closed; the site is now been occupied by Deakin University.

From 1972 to 2016, Ford Falcons were fully Australian designed. It also produced the Territory, which also ended production in 2016. Production of the Falcon ended with the closure of the Broadmeadows (Campbellfield) and Geelong engine and panel stamping plants. The Geelong factory produced its last Australian-made straight-six and V8 engines on 26 September 2016. Assembly at Broadmeadows ended on 7 October 2016, ending Ford’s 88 year history in Australia. 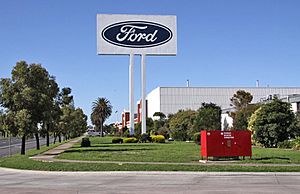 Ford has also designated as one of five (worldwide) full-service Regional Product Development Centre, specifically for the Asia Pacific and African regions. Products launched so far include the Ford Ikon and Fiesta in India and the Ford Bantam ute and Ikon (a sedan version of the Fiesta) in South Africa, and has also developed the new Ranger.

On 24 January 2019, engineers and designers were among more than 100 workers to lose their jobs at Ford in Victoria. About 40 salaried workers, 75 hourly workers and 90 contractors across Ford bases in Broadmeadows, Lara and Geelong would be affected, the company confirmed, as the automaker further consolidated its operations. Ford's engineering work on its Ranger ute and other models "will be led out of the United States", the company said in a statement. Remaining Australian-based engineers would have a "strategic role" in developing a new medium-sized pick-up truck for Ford and the German brand, the automaker said.

The Ford Laser was produced in Ford's plant at Homebush in Sydney, from 1981 until September 1994 when the plant closed, after which they were fully imported from Japan. The Laser was replaced by the Ford Focus in 2002. It is currently offered in sedan and hatchback variants with a 2.0L engine, which is one of the market leaders in sales. The Fiesta, a global Ford product, has also been offered since 2004.

Mid-size cars assembled in Australia included the Ford Cortina, Capri and Escort, from the UK. These were adapted for the Australian market: for example, from 1972, the Cortina was available with the option of either a 3.3-litre or 4.1-litre six-cylinder engine, and the Escort could be offered across the range with the Cortina's 2.0-litre motor. In 1977, lack of capacity meant that the Cortina wagon was in fact assembled in Renault's (now long since closed) Australian factory in Heidelberg, Victoria.

The Cortina's replacement, the Mazda 626-based Telstar, was initially assembled in Australia. In 1989 the Telstar sedan was replaced by the locally assembled Ford Corsair which was basically a rebadged Nissan Pintara. When Nissan shut down its Australian manufacturing operations in 1992 the Telstar nameplate was reintroduced, and as before it was a rebadged and respecced Mazda 626. In 1995 the Telstar was dropped in favour of the Mondeo, imported from Belgium.

Ford Australia dropped the Mondeo in 2001, arguing at the time that the segment of the market in which it competed was in decline, but in 2007, it announced that it would introduce the new Mk IV model in Australia. 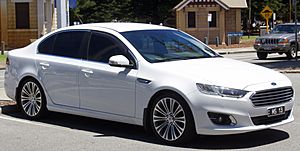 The Ford Falcon was manufactured in Australia according to its North American design, with the first model rolling off the production line at Ford's Broadmeadows plant on 28 June 1960. It differed little from the American design apart from conversion to right hand drive, and the Falcon soon proved unable to cope on harsh Australian roads, sparking a massive effort to introduce running engineering changes to improve its reliability. By the mid-1960s, the car was substantially different from its North American cousin and was offered in sedan, wagon, coupe, utility and panel van styles.

Production of the North American Falcon, upon which the Falcon was now loosely based, ended in 1970, forcing Australia to go it alone on design. The first true all-Australian Ford Falcon arrived with the XA model in June 1972.

The Falcon had been an Australian automotive icon for most of its 56 years in production, playing a prominent part in Australian life, popular culture and motor racing. Falcons have served as taxis, police cars, family runabouts, transport for tradespeople and have been the winning car many times in the Australian Touring Car Championship and at the annual Bathurst 1000 touring car race, where the Falcon's reputation for engineering excellence was cemented by the early 1970s through the Falcon GT and GTHO muscle car variants.

Ford has manufactured more than four million units since 1960, and has topped the sales charts on many occasions. Until 2016, the Falcon line-up was offered in sedan and utility body styles, however in the past panel vans, station wagons, and hardtops were offered. Falcons had dominated the ranks of taxis in Australia and New Zealand, along with sister car, the Ford Fairlane. Performance variants of the Falcon have been used extensively for pursuit work for many years.

Ford Australia produced a range of full-size luxury cars alongside the Falcon for most of its production history. These models were named the Fairlane and the LTD. The first Fairlane was released in 1959 and was an Australian assembled version of the Fairlane from the USA. This process of assembling American cars would continue until 1967 where Ford Australia would design its own luxury car, the ZA Fairlane. The ZA Fairlane was heavily based on the existing XR Falcon with an extended wheelbase, longer boot and styling changes. The car was released to critical acclaim and quickly established the Australian luxury car market as its own.

Ford Fairlanes were preferred vehicles among politicians and businessmen and was seen as the pinnacle of Australian automotive engineering and prestige. The second generation of Fairlane, introduced in 1972 brought a new model into the Australian luxury car market, the LTD. The LTD in effect was a Fairlane with even more luxury features such as retractable headlights, a vinyl roof and an even longer wheelbase. From the third generation of Fairlane onwards, the LTD shared the same wheelbase and body as the Fairlane with it being pitched as a more luxurious version of the Fairlane rather than being a completely different car.

The Fairlane sat on top of the Australian luxury car sales charts for many decades before its gradual downfall starting in the late 1980s with the rising import of foreign luxury cars such as BMW and Mercedes Benz. By the turn of the millennium, the Fairlane had been overtaken by the Holden Statesman in sales. In 2007, Ford Australia announced it would be cancelling further production of the Fairlane and LTD beyond the 2007 model year, citing falling sales and an uncertain future in the full-size luxury market. With the backing of large volume foreign exports, this left the Holden Statesman and Caprice as the sole players in the full-size extended wheelbase Australian luxury car market until their demise in 2017. 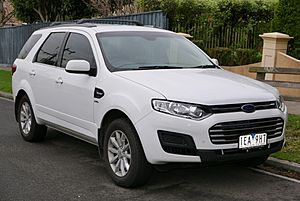 Between 2004 and 2016, the Ford Territory had been built on the same production line as the Falcon. The Territory (technically a crossover) had regularly been the most popular SUV in Australia since its release.

All content from Kiddle encyclopedia articles (including the article images and facts) can be freely used under Attribution-ShareAlike license, unless stated otherwise. Cite this article:
Ford Australia Facts for Kids. Kiddle Encyclopedia.