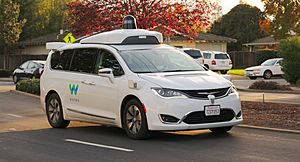 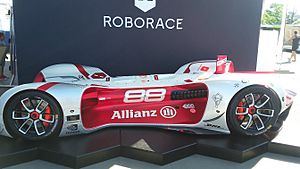 A driverless car (also called autonomous car or self-driving car, i.e. self-operating) is a car that can travel without the need for its driver to always be in control of the car's movement. It is a vehicle that can drive itself. The car uses sensors to understand what's around it and doesn't need a human's help.

All content from Kiddle encyclopedia articles (including the article images and facts) can be freely used under Attribution-ShareAlike license, unless stated otherwise. Cite this article:
Driverless car Facts for Kids. Kiddle Encyclopedia.