Glendora is a city in the San Gabriel Valley in Los Angeles County, California, 23 miles (37 km) east of downtown Los Angeles. As of the 2010 census, the population of Glendora was 50,073.

Known as the "Pride of the Foothills", Glendora is an affluent city with a diverse housing stock and a consistently high-ranking school district. Its quaint downtown area, better known as Glendora Village, is consistently voted as one of the best downtowns in the San Gabriel Valley. There are dozens of restaurants, cafes, shops and boutiques along the main street, Glendora Boulevard, and the Village is a source of pride to the friendly locals. Glendora celebrated its centennial as an incorporated city in 2011.

Glendora lies within the San Gabriel Valley, and it is bordered by Azusa to the west, San Dimas to the east and south, Covina to the south, and the San Gabriel Mountains range to the north. The area code is area code 626 with at small portion of southeast Glendora sharing area code 909 with the eastern Los Angeles County cities, such as Claremont, and western San Bernardino County. 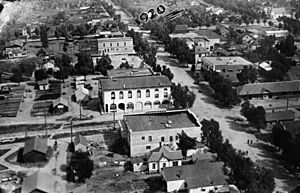 Located at the foot of the San Gabriel Mountains, modern Glendora was founded on April 1, 1887 by George D. Whitcomb who moved to California from Illinois in the early 1880s. Whitcomb was the founder of the Whitcomb Locomotive Works in Chicago and Rochelle, Illinois. He devised the name Glendora by combining the name of his wife, Leadora Bennett Whitcomb, with the location of his home in a glen of the San Gabriel Mountains. Prior to its 1911 incorporation, Glendora's administrator officially occupied the office of President of Glendora. 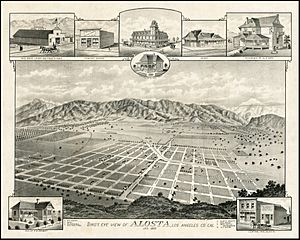 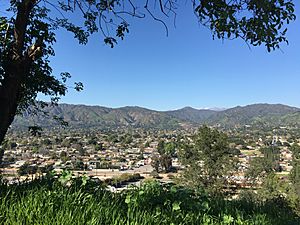 The downtown area as it appears now is the product of years of renovation and maintenance by the city. There once stood a movie theatre, various banks, and playhouses downtown but all were converted into more modern commercial buildings. The original layout can be read about on the Downtown Glendora Historical Walk, by reading placards placed along Glendora Avenue (previously called Michigan Avenue). The original townsite was bounded by Sierra Madre Avenue on the north, Minnesota Avenue on the east, Ada Avenue, & the railroad on the south, & Pennsylvania Avenue on the west.

Glendora used to be home to many military academies, which have since been converted into either churches or private school facilities. These academies included Brown Military Academy, now St. Lucy's Priory High School and Church of the Open Door on Sierra Madre, and Harding Military Academy, whose property is now home to North Glendora Private, a prestigious private community adjacent to Easley Canyon atop Glendora Avenue. 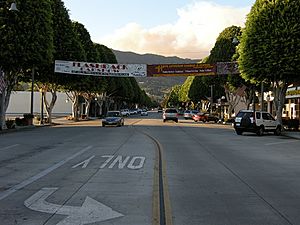 From 1960 to 1978, Glendora was home to Clokey Productions which produced 85 episodes of Gumby and 65 episodes of Davey and Goliath in town. In celebration of this history, Glendora hosted the first Gumby Fest in 2014 which brought thousands of people from around the country and Canada. In 2015 the 2nd GumbyFest was held at Citrus College over an entire weekend.

Several wildfires have affected the city in recent years, the most notable being the Colby Fire, which displaced hundreds of Glendora residents. A relief concert titled "Glendora Band Aid" was held shortly after the fire to help raise funds to assist the homeowners who lost their homes in the fire.

Glendora has an active Chamber of Commerce, established in 1903. The mission of the Glendora Chamber is to provide tools and resources to assist the business community in prospering and adapting to the economic climate, while growing membership and promoting local purchasing. 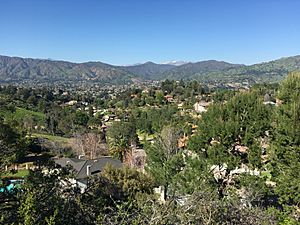 There were 16,819 households out of which 38.6% had children under the age of 18 living with them, 60.1% were married couples living together, 12.1% had a female householder with no husband present, and 23.5% were non-families. 19.1% of all households were made up of individuals and 7.9% had someone living alone who was 65 years of age or older. The average household size was 2.88 and the average family size was 3.30. 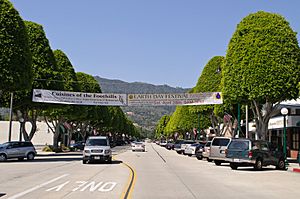 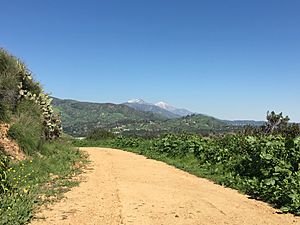 Glendora is an active community and it has an extensive system of parks, trails, and recreational programs for the community. 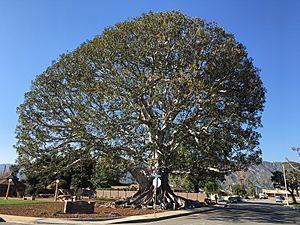 The Glendora Mountain Road is also a popular road for cyclists and sightseers offering spectacular views through the San Gabriel Mountains.

Glendora is served by Foothill Transit which provides connections through the city and express service to downtown Los Angeles. The Metro Gold Line termini station at APU/Citrus College in the adjacent city of Azusa also provides a transit link to the rest of the Metro system of trains and buses. A future extension of the Gold Line, from its current termini in Azusa to the City of Montclair in San Bernardino County, will include a station in Glendora to be located in the southeast corner of the intersection of Ada Ave and Vermont St. The station is not expected to be in service until 2026.

Glendora also runs its own weekday transportation shuttle service, the Glendora Mini Bus, with shuttles to the Metrolink Commuter Rail Station in nearby Covina, the APU/Citrus College Metro station, and an inter-school service connecting some of the city's schools. The Mini Bus also provides curb-to-curb transportation services for senior citizens and permanently disabled persons of Glendora. The bus operates: Monday–Friday, 8:00 a.m–5:00 p.m. Saturday–Sunday, 9:00 a.m.–2:00 p.m. The cost is 50¢ each way. Most of the Mini Buses have been recently acquired by the city, and are new and very modern (as well as fuel-efficient). 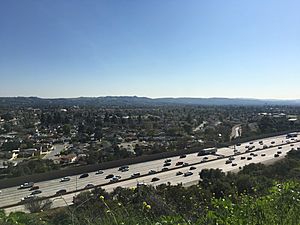 Glendora lies at the intersection of two major freeways, the 210 and the 57. These two freeways conveniently connect the city with the rest of the Southern California region. Historic U.S. Route 66 also traverses the city from east to west and it is an important corridor for businesses. Other major roads and highways include Foothill Blvd, Grand Ave, Arrow Hwy, and Lone Hill Ave.

All content from Kiddle encyclopedia articles (including the article images and facts) can be freely used under Attribution-ShareAlike license, unless stated otherwise. Cite this article:
Glendora, California Facts for Kids. Kiddle Encyclopedia.