San Dimas (Spanish for "Saint Dismas") is a city in the San Gabriel Valley of Los Angeles County, California, United States. As of the 2010 census, the city had a total population of 33,371. The city historically took its name from San Dimas Canyon in the San Gabriel Mountains above the northern section of present-day San Dimas.

San Dimas is bordered by the San Gabriel Mountains range to the north, Glendora and Covina to the west, La Verne to its north and east side, Pomona to its south and east side, and Walnut to the southwest.

The Tongva Native Americans lived in the area, and along with other tribes, in the region for over 8,000 years. These earliest residents, also referred to as the Tongva-Gabrieliño Tribe, of what is now known as San Dimas became part of the Mission Indians after Spanish colonization from the Mission San Gabriel occupied their lands in the late 18th century. 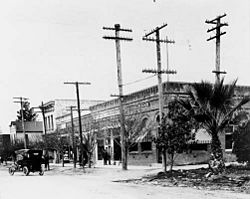 The first known European exploration of the area was in 1774, when Juan Bautista De Anza passed through on the first overland expedition of Las Californias, from New Spain-Mexico towards Monterey Bay. The area was originally developed in 1837 with the Mexican land grant from Governor Juan Bautista Alvarado to Ygnacio Palomares and Ricardo Vejar for the Rancho San Jose, then in Alta California. It later became known as La Cienega Mud Springs, so named because of local mud springs that created a riparian marsh and healing place. Palomares and Vejar conducted sheep and cattle operations on Rancho San Jose, also growing crops for consumption by the residents of the rancho. In the early 1860s, a severe drought decimated the ranch's population of sheep and cattle. Ygnacio Palomares died in 1864, and his widow began selling the ranch land in 1865. Vejar lost his share by foreclosure to two Los Angeles merchants, Isaac Schlesinger and Hyman Tischler, in 1864. In 1866, Schlesinger and Tischler sold the ranch to Louis Phillips.

It was the arrival of the Los Angeles and San Gabriel Valley Railroad in 1887, later purchased by Santa Fe Railroad, that La Cienega Mud Springs was first mapped The resulting land boom resulted in the formation of the San Jose Ranch Company, which first laid out streets. Small businesses began to open soon thereafter, and the city took on a new name: San Dimas. Growth was rapid, and San Dimas soon became an agricultural community. Wheat and other Midwestern United States crops were planted first; then orange and lemon groves covered the town and the San Gabriel Valley. At one time, four citrus packing houses and a marmalade factory were located in San Dimas. The Sunkist name originated here, first spelled "Sunkissed." Oranges were the major crop and business in San Dimas until the mid-20th century.

San Dimas incorporated as a city in 1960, and is now known for its small town and equestrian qualities

In 1971, the San Dimas Golf Course was purchased.

In 1989 San Dimas was the setting for the film Bill & Ted's Excellent Adventure, as it was for the 1991 sequel Bill & Ted's Bogus Journey. 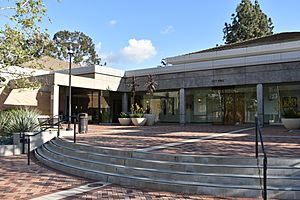 The city hall of San Dimas

San Dimas is a suburb of Los Angeles nestled along the foothills of the San Gabriel Mountains, about 28 miles (45 km) east/northeast of Downtown Los Angeles and north of the Pacific Ocean. According to the United States Census Bureau, the city has a total area of 15.4 sq. mi.. 15.0 sq mi (39 km2) of it is land and 0.39 sq mi (1.0 km2) of it is water. Cinnamon Creek crosses the city, roughly parallel to the Arrow Highway, before reaching Cinnamon Falls near San Dimas Avenue.

San Dimas runs along and southward from historic U.S. Route 66, another part of its development in the earlier 20th century. Other major arteries include Arrow Highway (east–west) and San Dimas Avenue (north–south). The Foothill Freeway (I-210) connects the town to Pasadena and the San Fernando Valley, with California State Route 57 connecting to Orange County and the beaches.

This region experiences warm (but not hot) and dry summers, with no average monthly temperatures above 71.6 °F. According to the Köppen Climate Classification system, San Dimas has a warm-summer Mediterranean climate, abbreviated "Csb" on climate maps.

Of the 12,030 households, 32.2% had children under the age of 18 living in them, 54.9% were opposite-sex married couples living together, 12.2% had a female householder with no husband present, 5.1% had a male householder with no wife present, 4.5% were unmarried opposite-sex partnerships, and 91 (0.8%) same-sex married couples or partnerships. About 22.2% were made up of individuals, and 10.6% had someone living alone who was 65 years of age or older. The average household size was 2.73. Families comprised 72.1% of all households; the average family size was 3.19.

According to the 2010 United States Census, San Dimas had a median household income of $78,685, with 6.6% of the population living below the federal poverty line.

Landmarks and points of interest

In the 1953 film Hondo, John Wayne's lead character is said to have a ranch just east of San Dimas.

The 1989 film Bill & Ted's Excellent Adventure and the 1991 sequel Bill & Ted's Bogus Journey were set in San Dimas, California, which in the storyline of the movie, is the "Center of the Universe" according to Bill & Ted. In actuality, the bulk of the first film was shot in and around Phoenix, Arizona, while the latter was filmed primarily in the Los Angeles area.

San Dimas is home to:

A future extension of the Metro L Line, from its current terminus in Azusa to the City of Montclair in San Bernardino County, will include a station in downtown San Dimas. The station is not expected to be in service until 2026. When it opens, the rail line will be renamed the A Line per Metro's new naming convention, and it will connect with the former Blue Line via the new Regional Connector in downtown Los Angeles.

The following individuals are either notable current or former residents of San Dimas (R), were born or raised in San Dimas in their early years (B), or otherwise have a significant connection to the history of the San Dimas area (C).

All content from Kiddle encyclopedia articles (including the article images and facts) can be freely used under Attribution-ShareAlike license, unless stated otherwise. Cite this article:
San Dimas, California Facts for Kids. Kiddle Encyclopedia.