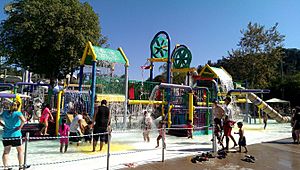 Raging Waters opened June 18, 1983, located in Los Angeles County in the city of San Dimas, near SR 57 between Interstate 10 and Interstate 210. Park officials described it as California's largest water park in 2011.

The park was formerly known as "Raging Waters San Dimas", but as of 2016, official media was using the name "Raging Waters Los Angeles" for this location. 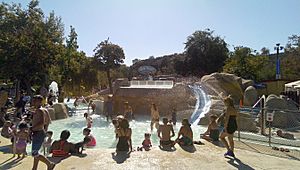 Aqua Rocket is a coaster-style slide that uses magnetic propulsion to propel a raft up hills.

Amazon Adventure is a quarter-mile-long, 3-foot-deep (0.9 m), tropical river that runs through a section of the park. Riders sit in rafts as the current pulls them around the river route.

Bermuda Triangle consists of three twisting, turning, downward tunnels that recycle more than 2,500 gallons of water a minute and make riders feel like they have entered the Bermuda Triangle.

Dark Hole is a system of two fiberglass tunnels with a total drop of fifty-two feet. Riders used to sit in a single person raft identical to the ones used in Amazon River, but as of 2016 riders sit in a two-person raft speeding through the total darkness of the long flumes, the first of its kind in the country. Riders travel at a speed of 26 miles per hour.

Dr. Von Dark's Tunnel of Terror is a slide in which riders experience a 40 feet drop into a dark tunnel. Riders will then drop into a small mini funnel.

Dragon's Den is a slide which debuted in 2004 and is a two-rider tube ride that sends guests plummeting down a steep 45-foot (14 m) tunnel, circling around a 35-foot (11 m) bowl 9-foot (2.7 m) until they fall through a secret tunnel at the bottom. As of 2016, Dragon's Den is ridden as a single-rider with tubes identical to the ones used in Amazon River.

DropOut is a seven-story body slide. Riders plunge at a near free fall, reaching speeds close to 40 miles per hour. Some riders will lift off the slide when coming down.

FlowRider debuted in 2007; riders ride on a boogie board on a jet-made continuous wave that moves 36,000 gallons of water per minute. Riders may perform tricks and other stunts at their own discretion. Although similar rides can be found throughout the US, FlowRider is the first of its kind at Raging Waters. 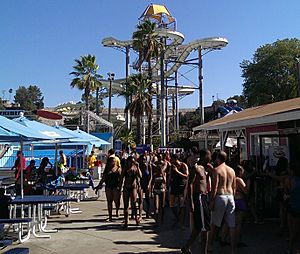 High Extreme, standing at 10 stories, High Extreme sends riders through 600-foot (180 m) flumes, reaching speeds of up to thirty-five miles per hour. This ride originally used a toboggan-like raft for single riders; however, for many years thereafter only the two-person raft was used. As of 2006, the head-first toboggans returned and guests could choose between the two. In 2007, use of the double tubes was again discontinued, in favor of the head-first toboggans.

Neptune's Fury is a closed tube ride in which 3 or 4 people sit together. It is dark inside to cause disorientation. This 600-foot-long (180 m) wild ride plunges the raft into total darkness through a 108-inch-diameter (270 cm) tunnel and down a 60-foot (18 m) drop at 30 miles per hour.

Ragin' Racer, riders race down the eight-lane slide on head-first toboggan mats similar to those used on High Extreme. At eight lanes and over 200 feet (61 m) long, Ragin' Racer is the largest slide of its type in the country. Going up to 34 miles per hour..

Splash Island Adventure is a tropical-themed collection of 75 activities – including four slides, water cannons, web crawl tunnels, spiral cargo nets and swinging bridges. Splash Island's centerpiece is a 1,000-gallon bucket atop a five-story tower that tips hundreds of gallons of water over the whole attraction every few minutes.

Vortex is a four-story tower featuring two enclosed, 270-foot-long spiral body flumes. It was shut down sometime after 2016.

Wave Cove is one of Raging Water's oldest and most popular attractions. It is a million-gallon pool with fan blades at the deep end, producing waves of up to three feet. Riders may be in the pool with or without an inner tube. 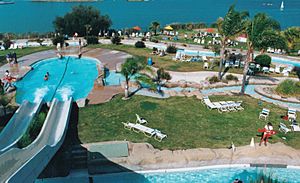 All content from Kiddle encyclopedia articles (including the article images and facts) can be freely used under Attribution-ShareAlike license, unless stated otherwise. Cite this article:
Raging Waters Facts for Kids. Kiddle Encyclopedia.