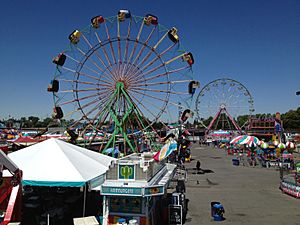 The California legislature created the State Agricultural Society to promote California's reputation for farming and industry. An agricultural exposition was organized and held in San Francisco in 1854, and California Historic Landmark #861 marks the site. Given that travel was difficult in that era, the next several annual expositions were moved around the state, to Sacramento, San Jose, Stockton, and Marysville.

Cal Expo has seen limited changes over the years. Following the tragic attacks of 9/11, a memorial plaza was installed in 2002. In 2012, the Disneyland Resort donated to Cal Expo the iconic 'CALIFORNIA' letters that previously stood in front of Disney California Adventure from its 2001 opening until 2011. The letters now stand at the entrance to the Expo.

Cal Expo is home to one of two operating permanent monorail system in California - the only other can be found at Disneyland. The iconic monorail was installed during the creation of its existing grounds in 1968 by Universal Mobility Incorporated. The Monorail ride is only open for public use during the annual State Fair and is a great way to see the grounds from above. The storage facility for the monorail trams are located in the northwest corner of the grounds. Each tram features a different California symbol, like the California Golden Poppy or California Quail.

All content from Kiddle encyclopedia articles (including the article images and facts) can be freely used under Attribution-ShareAlike license, unless stated otherwise. Cite this article:
California Exposition Facts for Kids. Kiddle Encyclopedia.