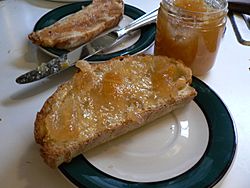 Marmalade spread on a slice of bread

Marmalade generally refers to a fruit preserve made from the juice and peel of citrus fruits boiled with sugar and water. It can be produced from kumquats, lemons, limes, grapefruits, mandarins, sweet oranges, bergamots, and other citrus fruits, or any combination of them.

For many decades now, the preferred citrus fruit for marmalade production in the British Isles has been the Spanish Seville orange, Citrus aurantium var. aurantium, prized for its high pectin content, which sets readily to the thick consistency expected of marmalade. The peel imparts a bitter taste. 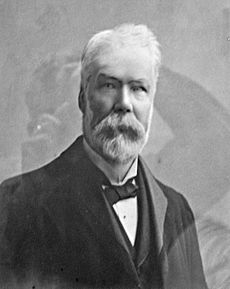 The Romans learned from the Greeks that quinces slowly cooked with honey would "set" when cool (though they did not know about fruit pectin). Greek μελίμηλον (melimēlon, "honey fruit") transformed into Portuguese marmelo— from the Greek μῆλον (mēlon, "apple") stood for all globular fruits, and most quinces are too astringent to be used without honey. A Roman cookbook attributed to Apicius gives a recipe for preserving whole quinces, stems and leaves attached, in a bath of honey diluted with defrutum—Roman marmalade. Preserves of quince and lemon appear—along with rose, apple, plum and pear—in the Book of ceremonies of the Byzantine Emperor Constantine VII Porphyrogennetos, "a book that is not only a treatise on the etiquette of imperial banquetting in the ninth century, but a catalogue of the foods available and dishes made from them."

Medieval quince preserves, which went by the French name cotignac, produced in a clear version and a fruit pulp version, began to lose their medieval seasoning of spices in the 16th century. In the 17th century, La Varenne provided recipes for both thick and clear cotignac.

In 1524, Henry VIII received a "box of marmalade" from Mr Hull of Exeter. As it was in a box, this was probably marmelada, a solid quince paste from Portugal, still made and sold in southern Europe. Its Portuguese origins can be detected in the remarks in letters to Lord Lisle, from William Grett, 12 May 1534, "I have sent to your lordship a box of marmaladoo, and another unto my good lady your wife" and from Richard Lee, 14 December 1536, "He most heartily thanketh her Ladyship for her marmalado".

The English recipe book of Eliza Cholmondeley, dated from 1677 and held at the Chester Record Office in the Cheshire county archivists, has one of the earliest marmalade recipes ("Marmelet of Oranges") which produced a firm, thick dark paste. The Scots are credited with developing marmalade as a spread, with Scottish recipes in the 18th century using more water to produce a less solid preserve.

The first printed recipe for orange marmalade, though without the chunks typically used now, was in Mary Kettilby's 1714 cookery book, A Collection of above Three Hundred Receipts (pages 78–79). Kettilby called for whole oranges, lemon juice and sugar, with the acid in the lemon juice helping to create the pectin set of marmalade, by boiling the lemon and orange juice with the pulp. Kettilby then directs: "boil the whole pretty fast 'till it will jelly" – the first known use of the word "jelly" in marmalade making. Kettilby then instructs that the mixture is then poured into glasses, covered and left until set. As the acid would create a jelly, this meant that the mixture could be pulled from the heat before it had turned to a paste, keeping the marmalade much brighter and the appearance more translucent, as in modern-day marmalade.

The Scots moved marmalade to the breakfast table, and in the 19th century the English followed the Scottish example and abandoned the eating of marmalade in the evening. Marmalade's place in British life appears in literature. James Boswell remarks that he and Samuel Johnson were offered it at breakfast in Scotland in 1773. When American writer Louisa May Alcott visited Britain in the 1800s, she described "a choice pot of marmalade and a slice of cold ham" as "essentials of English table comfort". 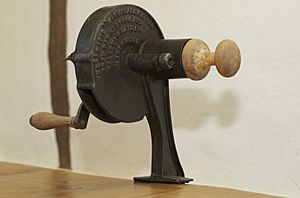 According to the Oxford English Dictionary, marmalade appeared in the English language in 1480, borrowed from French marmelade which, in turn, came from the galician language word marmelada. According to José Pedro Machado’s Dicionário Etimológico da Língua Portuguesa, the oldest known document where this Portuguese word is to be found is Gil Vicente’s play Comédia de Rubena, written in 1521:

The extension of marmalade in the English language to refer to a preserve made from citrus fruits occurred in the 17th century, when citrus first began to be plentiful enough in England for the usage to become common.

In Portuguese, according to the root of the word, which is marmelo, "quince", marmelada is a preserve made from quinces, quince cheese. Marmelo in turn derives from Latin melimelum, "honey apple", which in turn comes from the earlier Greek μελίμηλον (melímēlon), from μέλι (meli), "honey" + μήλον (mēlon), "apple".

There is an apocryphal story that Mary, Queen of Scots, ate it when she had a headache, and that the name is derived from her maids' whisper of Marie est malade (Mary is ill). In reality, the word's origin has nothing to do with Mary. 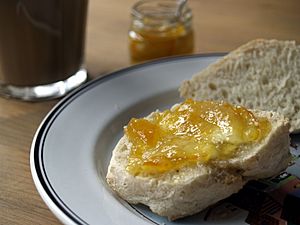 In much of Europe and Latin America, cognates for the English term "marmalade" are still used as a generic term for preserves of all fruits, whereas in Britain it refers solely to a citrus preserve. The name originates in Portuguese, where marmelada applies exclusively to quince jam. In Spanish the term usually refers to what in English is called jam, and jalea — used in Mexico and Central America — is similar to the American English jelly. In Italian, marmellata means any jam and marmalade, as does the German word Marmelade. 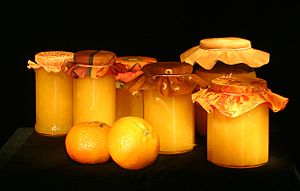 The Scottish city of Dundee has a long association with marmalade. James Keiller and his wife Janet ran a small sweet and preserves shop in the Seagate area of Dundee. In 1797, they opened a factory to produce "Dundee Marmalade", a preserve distinguished by thick chunks of bitter Seville orange rind. The business prospered, and remains a signature marmalade producer today.

According to a Scottish legend, the creation of orange marmalade in Britain occurred by accident. The legend tells of a ship carrying a cargo of oranges that broke down in the port of Dundee, resulting in some ingenious locals making marmalade out of the cargo.

Paddington Bear, a fictional character in children's literature, is renowned for his liking for marmalade, particularly in sandwiches, and kept it in his briefcase wherever he went.. Paddington Bear is now used on the label of the smaller peel ("shred") and clearer/milder Robertson's 'Golden Shred' marmalade. The 2014 movie Paddington led to a slight increase in marmalade sales in the UK.

All content from Kiddle encyclopedia articles (including the article images and facts) can be freely used under Attribution-ShareAlike license, unless stated otherwise. Cite this article:
Marmalade Facts for Kids. Kiddle Encyclopedia.