Paddington is a 2014 live-action animated comedy film written and directed by Paul King from a story by King and Hamish McColl and produced by David Heyman. Based on the stories of the character Paddington Bear created by Michael Bond, the film stars Ben Whishaw as the voice of the title character, with Hugh Bonneville, Sally Hawkins, Julie Walters, Jim Broadbent, Peter Capaldi, and Nicole Kidman in live-action roles. The film tells the story of the eponymous character Paddington, an anthropomorphic bear who migrates from the jungles of Peru to the streets of London, where he is adopted by the Brown family. Kidman plays the role of a taxidermist, who attempts to add him to her collection.

A British and French venture produced by StudioCanal UK, TF1 Films Production, and Heyday Films, principal photography began in September 2013, before wrapping in June 2014. Colin Firth was originally set to voice the role of Paddington, before dropping out in post-production and being replaced by Whishaw.

In the deep jungles of Darkest Peru, a British geographer discovers a previously unknown species of bear. He is about to shoot it to take back a specimen to the United Kingdom when a second bear playfully takes his gun away and saves his life by removing a deadly scorpion from his jacket. He learns that the bears are intelligent and can learn English, and that they have a deep appetite for marmalade, and names them Lucy (after his mother) and Pastuzo (after an exotic boxer he once met). As he departs, he throws his hat to Pastuzo and tells the bears that they are always welcome if they wish to go to London.

Forty years later, the two bears are living in harmony with their orphaned nephew, until an earthquake destroys their home, forcing them to seek shelter underground. Uncle Pastuzo fails to reach the shelter in time and is killed by a falling tree; his nephew finds his hat the next morning. Aunt Lucy encourages her nephew to go and find solace in London by stowing away on a cargo ship, while she moves into the Home for Retired Bears.

The young bear arrives in London and eventually reaches Paddington Station, where he meets the Brown family, who take him home temporarily and name him after the station they found him in. Henry Brown, the father and a devoted risk analyst, does not believe Paddington's story, and is adamant that Paddington stay only one night while they find a place for him to live permanently, but his wife Mary, an illustrator, and their two children, Jonathan and Judy, find him endearing, as does Mrs. Bird, the housekeeper.

Paddington thinks he can find a home with the explorer who found Aunt Lucy and Uncle Pastuzo, but does not know his name. Since there seems to be no word of his expedition anywhere on the Internet, Mary takes Paddington to Samuel Gruber, an antique shop owner who discovers that the hat bears the stamp of the Geographers' Guild, but the Guild has no record of an expedition to Peru. With the help of Henry, Paddington infiltrates the Guild's archive and discovers an expedition to Peru was undertaken by the explorer, whose name is Montgomery Clyde (although the Guild erased their record of the expedition).

Meanwhile, the hateful museum taxidermist Millicent Clyde captures, kills, and stuffs exotic animals to house in the Natural History Museum. When she becomes aware of Paddington, she immediately sets out to hunt him down. The Brown family departs for the day, leaving Paddington home alone. Scheming with the Browns' nosy next-door neighbour, Mr. Curry, Millicent sneaks in and attempts to capture Paddington; he manages to defend himself, but inadvertently starts a fire in the kitchen in the process. Paddington tries to tell the Browns his story of Millicent's kidnapping attempt, but no one believes him.

That night, Paddington leaves and attempts to track down Montgomery Clyde himself, using the phone book to find the addresses of every "M. Clyde" in London. He eventually finds Millicent's house, and learns that Montgomery Clyde, who was Millicent's father, died a long time ago. Millicent resents her father for losing his membership of the Guild after he refused to bring a Peruvian bear specimen home, even though it would have made his family wealthy, and subsequently opened a petting zoo. Millicent is determined to succeed where her father failed, by stuffing Paddington so she can become rich and famous herself. She tranquilizes Paddington and prepares to stuff him, but when Mr. Curry discovers her true intentions, he informs the Brown family and they rush to save Paddington. They rescue him, and after reaching the roof, Paddington subdues Millicent by throwing a marmalade sandwich (which he keeps in his hat for emergencies) at her. This attracts a huge flock of pigeons, distracting her, before Mrs. Bird opens a roof hatch, pushing her off the roof and trapping her on a flagpole.

In the aftermath, the Browns allow Paddington to move in with their family. Millicent is arrested and subsequently sentenced to community service at the petting zoo her father opened. Paddington writes to Aunt Lucy, saying he is happy and has finally found a home. He is later seen enjoying a snowball fight with the Browns, and throws one at the camera before the film ends. 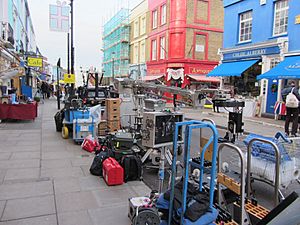 Filming equipment for Paddington on Portobello Road, London in 2013

The film was first announced in September 2007, with David Heyman producing and Hamish McColl writing the screenplay. Further developments were not made until September 2013, when filming began and Heyman announced the casting of Colin Firth as Paddington. With a budget of €38.5 million ($50–55 million), Paddington is the most expensive film produced by the French production company StudioCanal. Principal photography and production began on 13 September 2013.

Filming locations for Paddington were mostly in West London. The Paddington Station scenes were mostly filmed inside London Paddington station, although the exterior establishing shot used the front entrance of nearby Marylebone Station in Marylebone. Exterior shots of the Brown family home in Windsor Gardens were shot in Chalcot Crescent in Primrose Hill. Scenes in Mr Gruber's shop were filmed inside an antique shop on Portobello Road, and the skateboard chase sequence was filmed in Portobello Road Market and Maida Vale. For the fictional Tube station, Westbourne Oak, three separate locations were used: the entrance hall at Maida Vale tube station, on the escalators inside St. John's Wood tube station, and on the disused Jubilee line platforms in Charing Cross tube station. The exterior and entrance hall of the Reform Club on Pall Mall served at the location for the Geographers' Guild, while the other interior scenes were filmed inside Hatfield House in Hertfordshire. Museum scenes were shot at the Natural History Museum in South Kensington, and a house on Downshire Hill in Hampstead served as the home of Millicent Clyde.

In June 2014, after principal photography had wrapped, Firth voluntarily dropped out of the film, after the studio decided his voice was not suitable for Paddington. The role was recast the following month, with Ben Whishaw signing on to voice the title role. Paddington was created using a combination of computer-generated imagery (by the British company Framestore) and animatronics.

Nick Urata composed the film's soundtrack. Gwen Stefani and Pharrell Williams were commissioned to write a song for the film's American release, which turned into "Shine".

All music composed by Nick Urata, except where noted.

A video game based on the film, titled Paddington: Adventures in London, was released on 11 August 2015 for Nintendo 3DS and is published by Humongous Entertainment through their Kids' Mania label.

The film was released in the United States by TWC-Dimension on 16 January 2015. The film opened to third place in its first weekend, earning $19.0 million, behind American Sniper and The Wedding Ringer, and closed with a total of $76.3 million.

A sequel to the film was released on 10 November 2017 in the United Kingdom. David Heyman returned to produce. Paul King returned to direct and co-wrote the sequel with Simon Farnaby. A third film has also been confirmed.

On 9 October 2017, it was announced that StudioCanal were producing an animated TV series based on the films called "The Adventures of Paddington", set to launch in either late 2018 or early 2019. It was announced in February 2019, that the series would launch worldwide in 2020 on Nickelodeon, with Whishaw reprising his voice of Paddington.

All content from Kiddle encyclopedia articles (including the article images and facts) can be freely used under Attribution-ShareAlike license, unless stated otherwise. Cite this article:
Paddington (film) Facts for Kids. Kiddle Encyclopedia.