Rubel Castle (also known as Rubelia), was established in Glendora, California, by Michael Clarke Rubel (April 16, 1940 – October 15, 2007), and is currently owned and operated by the Glendora Historical Society. It has been called "a San Gabriel Valley version of Watts Towers."

Rubel purchased a 1.7 acre citrus orchard on which the structure resides in 1959. He and his friends completed construction in 1986. Rubelia could be thought of as the first major recycling project in the United States.

Rubel Castle was constructed partly out of concrete but also out of scrap steel, rocks, bedsprings, coat hangers, bottles, and other re-purposed materials that Rubel salvaged from the neighborhood as ranches and barns were giving way to tract houses. 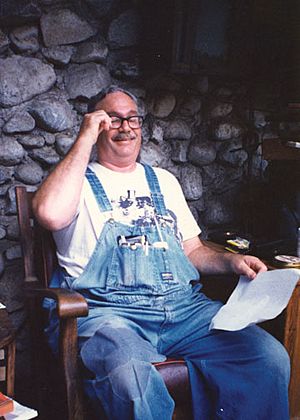 In 1959, Rubel bargained for the defunct Albourne Rancho property and took up residence in the huge citrus packing house. Rubel's father, Henry "Heinz" Scott Rubel, had been an Episcopal priest and gag writer for Joe Penner, the famous radio comedian and movie star. In the 1960s, Rubel's mother, one-time Broadway actress and Greenwich Village Follies dancer Dorothy Deuel Rubel, moved into the packing house with her son. At 200 feet (61 m) long it was the perfect venue for her favorite hobby: parties. Well-dressed guests arrived weekly by the hundreds, strolling past old tractors, horses, poultry, buggies, and the gritty accouterments of the bucolic rancho period, to arrive inside a tin fruit packing house transformed into a giant dance hall. Inside, surrounded by art and antique furniture remaining from Rubel ancestors, they mingled in the smudge oil and orange blossom atmosphere and danced to a small orchestra.

Construction of the castle

Though Rubel slept in one of the giant citrus refrigerators, the walls of thick cork were not sufficient sound insulation to allow him peace from his mother's parties. Beginning in 1968, Rubel began building a small get-away house in the empty old 1,000,000 gallon concrete reservoir, using cement and discarded champagne bottles. The walls of the reservoir provided privacy and a noise barrier while he built the bottle house. The project lasted twenty years, culminating in what is now called the Rubel Castle.

With the encouragement of old timers like Odo B. Stade, and with the help of many friends and relations, the castle grew to be thousands of square feet with towers five stories high. Rubel and his associates built the structure without architectural plans, utilizing salvaged river rock, cement, steel, aluminum, telephone poles and wine bottles. Old motorcycles, tires, sand-filled rubber gloves, a camera, a golf club and a toaster are some of the items that protrude from the castle.

A restored 1911 Seth Thomas clock works runs the brass bells and clock that crown one of the high towers, which is 74 feet (23 m) high. In the middle of the property sit a 1940s-era Santa Fe caboose, as well as old trucks and tractors. There is also a cemetery with rejected marble tombstones (but no graves).

In addition, “chickens are abundant and love this property as well as frequent animal visitors.”

Over the decades, Rubel Castle has instilled a work ethic in hundreds of young people and stands as a celebration of the independent spirit. Huell Howser interviewed Rubel for Videolog in 1990 and again in 2011.

Like a true castle, it has hosted royalty including Prince Philip. Some other notable guests have been Henry Kissinger, the Archbishop of Canterbury Robert Runcie, and Governor George Deukmejian.

In March 2005, Rubel donated the Castle to the Glendora Historical Society.

Many television programs, music videos, and movies have been filmed on castle grounds, including NBC's Heroes and T-mobile's Frankenstein commercial.

Rubel Castle was added to the National Register of Historic Places in 2013.

All content from Kiddle encyclopedia articles (including the article images and facts) can be freely used under Attribution-ShareAlike license, unless stated otherwise. Cite this article:
Rubel Castle Facts for Kids. Kiddle Encyclopedia.