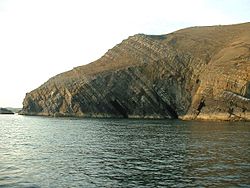 Strata are the layers of rock, originally laid down horizontally. This is from Trwyn y Fulfran, Lleyn, Wales. 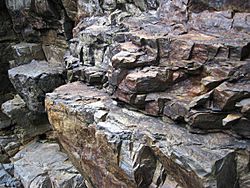 The rocky side of a mountain creek near Orosí, Costa Rica.

Rock is often covered by soil or water. It is beneath the oceans, lakes, and rivers of the earth, and under the polar icecaps. Petrology is the scientific study of rocks.

Rocks are classified by their minerals and chemical make-up. The processes that formed them are also noted. Rocks may be igneous, sedimentary and metamorphic. Rock types may change in a so-called rock cycle.

Igneous rocks are formed when molten magma cools, either above or below the surface. They are divided into two main categories: plutonic rock and volcanic rock. Plutonic or intrusive rocks are made when magma cools and crystallizes slowly within the Earth's crust (example granite). Volcanic or extrusive rocks result from magma reaching the surface either as lava or ejecta (examples pumice and basalt). 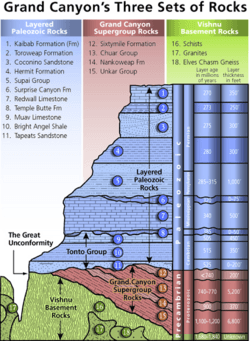 Diagram showing the placement, age and thickness of the rock units exposed in the Grand Canyon.

Sedimentary rocks are the most common rocks on Earth. They form at or near the Earth's surface. Sedimentary rock is formed in layers which were laid down one by one on top of another. Some of the layers are thin, some are thick. Layers are made by deposition of sediment, organic matter, and chemical precipitates. 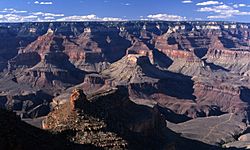 The Grand Canyon in Colorado.

Deposition is followed by squeezing of sediment under its own weight, and cementation. This process is called 'consolidation': it turns the sediment into a more or less hard substance.

The approximate amounts of different kinds of sedimentary rock are:

Only sedimentary rocks have fossils.

Metamorphic rocks are formed by rocks coming under great pressure and high temperatures. These temperatures and pressures are found under mountains and volcanoes, especially when continental plates move together. These conditions change the make-up of the original minerals.

Rocks have had an impact on human life. They have been used by humans for over two million years. The mining of rocks for their metals has been one of the most important things in human advancement. Rocks are mined for building materials of all kinds.

All content from Kiddle encyclopedia articles (including the article images and facts) can be freely used under Attribution-ShareAlike license, unless stated otherwise. Cite this article:
Rocks Facts for Kids. Kiddle Encyclopedia.