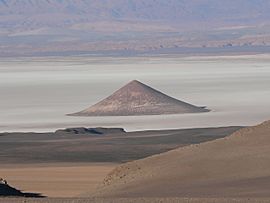 Geomorphology is the scientific study of landforms and the processes that shape them.

More broadly, it studies the evolution of the topography of a planet. Geomorphologists seek to understand why landscapes look the way they do, to understand landform history and dynamics, and to predict future changes. They use a combination of field observation, physical experiment, and numerical modeling.

Geomorphology is part of geography, geology, geodesy, engineering geology and archaeology. This range of interests leads to a wide variety of research styles and interests in the field. 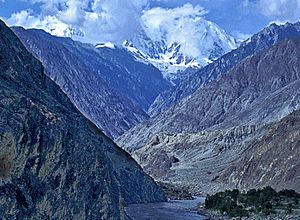 Gorge cut by the Indus river into bedrock, Nanga Parbat region, Pakistan. This is the deepest river canyon in the world. Nanga Parbat itself, the world's 9th highest mountain, is seen in the background. 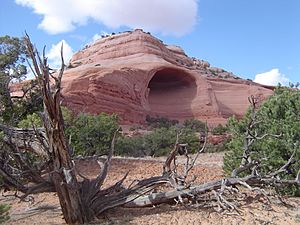 Aeolian processes pertain to the activity of the winds and more specifically, to the winds' ability to shape the surface of the Earth. Winds may erode, transport, and deposit materials, and are effective agents in regions with sparse vegetation and a large supply of fine, unconsolidated sediments. Although water and mass flow tend to mobilize more material than wind in most environments, aeolian processes are important in arid environments such as deserts. 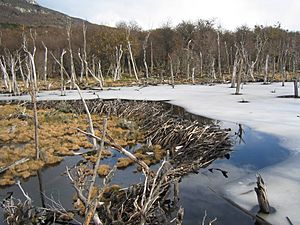 Beaver dams, as this one in Tierra del Fuego, constitute a specific form of zoogeomorphology, a type of biogeomorphology.

The interaction of living organisms with landforms, or biogeomorphologic processes, can be of many different forms, and is probably of profound importance for the terrestrial geomorphic system as a whole. Biology can influence very many geomorphic processes, ranging from biogeochemical processes controlling chemical weathering, to the influence of mechanical processes like burrowing and tree throw on soil development, to even controlling global erosion rates through modulation of climate through carbon dioxide balance. Terrestrial landscapes in which the role of biology in mediating surface processes can be definitively excluded are extremely rare, but may hold important information for understanding the geomorphology of other planets, such as Mars. 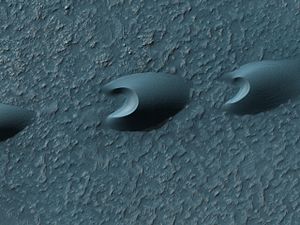 Seif and barchan dunes in the Hellespontus region on the surface of Mars. Dunes are mobile landforms created by the transport of large volumes of sand by wind.

Rivers and streams are not only conduits of water, but also of sediment. The water, as it flows over the channel bed, is able to mobilize sediment and transport it downstream, either as bed load, suspended load or dissolved load. The rate of sediment transport depends on the availability of sediment itself and on the river's discharge. Rivers are also capable of eroding into rock and creating new sediment, both from their own beds and also by coupling to the surrounding hillslopes. In this way, rivers are thought of as setting the base level for large-scale landscape evolution in nonglacial environments. Rivers are key links in the connectivity of different landscape elements.

As rivers flow across the landscape, they generally increase in size, merging with other rivers. The network of rivers thus formed is a drainage system. These systems take on four general patterns: dendritic, radial, rectangular, and trellis. Dendritic happens to be the most common, occurring when the underlying stratum is stable (without faulting). Drainage systems have four primary components: drainage basin, alluvial valley, delta plain, and receiving basin. Some geomorphic examples of fluvial landforms are alluvial fans, oxbow lakes, and fluvial terraces. 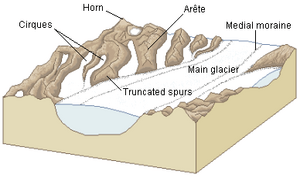 Features of a glacial landscape

Glaciers, while geographically restricted, are effective agents of landscape change. The gradual movement of ice down a valley causes abrasion and plucking of the underlying rock. Abrasion produces fine sediment, termed glacial flour. The debris transported by the glacier, when the glacier recedes, is termed a moraine. Glacial erosion is responsible for U-shaped valleys, as opposed to the V-shaped valleys of fluvial origin.

The way glacial processes interact with other landscape elements, particularly hillslope and fluvial processes, is an important aspect of Plio-Pleistocene landscape evolution and its sedimentary record in many high mountain environments. Environments that have been relatively recently glaciated but are no longer may still show elevated landscape change rates compared to those that have never been glaciated. Nonglacial geomorphic processes which nevertheless have been conditioned by past glaciation are termed paraglacial processes. This concept contrasts with periglacial processes, which are directly driven by formation or melting of ice or frost.

Talus cones on the north shore of Isfjorden, Svalbard, Norway. Talus cones are accumulations of coarse hillslope debris at the foot of the slopes producing the material. 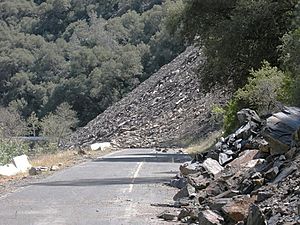 The Ferguson Slide is an active landslide in the Merced River canyon on California State Highway 140, a primary access road to Yosemite National Park.

Soil, regolith, and rock move downslope under the force of gravity via creep, slides, flows, topples, and falls. Such mass wasting occurs on both terrestrial and submarine slopes, and has been observed on Earth, Mars, Venus, Titan and Iapetus.

On the Earth, biological processes such as burrowing or tree throw may play important roles in setting the rates of some hillslope processes.

Both volcanic (eruptive) and plutonic (intrusive) igneous processes can have important impacts on geomorphology. The action of volcanoes tends to rejuvenize landscapes, covering the old land surface with lava and tephra, releasing pyroclastic material and forcing rivers through new paths. The cones built by eruptions also build substantial new topography, which can be acted upon by other surface processes. Plutonic rocks intruding then solidifying at depth can cause both uplift or subsidence of the surface, depending on whether the new material is denser or less dense than the rock it displaces.

Tectonic effects on geomorphology can range from scales of millions of years to minutes or less. The effects of tectonics on landscape are heavily dependent on the nature of the underlying bedrock fabric that more or less controls what kind of local morphology tectonics can shape. Earthquakes can, in terms of minutes, submerge large areas of land creating new wetlands. Isostatic rebound can account for significant changes over hundreds to thousands of years, and allows erosion of a mountain belt to promote further erosion as mass is removed from the chain and the belt uplifts. Long-term plate tectonic dynamics give rise to orogenic belts, large mountain chains with typical lifetimes of many tens of millions of years, which form focal points for high rates of fluvial and hillslope processes and thus long-term sediment production.

Features of deeper mantle dynamics such as plumes and delamination of the lower lithosphere have also been hypothesised to play important roles in the long term (> million year), large scale (thousands of km) evolution of the Earth's topography (see dynamic topography). Both can promote surface uplift through isostasy as hotter, less dense, mantle rocks displace cooler, denser, mantle rocks at depth in the Earth.

Marine processes are those associated with the action of waves, marine currents and seepage of fluids through the seafloor. Mass wasting and submarine landsliding are also important processes for some aspects of marine geomorphology. Because ocean basins are the ultimate sinks for a large fraction of terrestrial sediments, depositional processes and their related forms (e.g., sediment fans, deltas) are particularly important as elements of marine geomorphology.

All content from Kiddle encyclopedia articles (including the article images and facts) can be freely used under Attribution-ShareAlike license, unless stated otherwise. Cite this article:
Geomorphology Facts for Kids. Kiddle Encyclopedia.