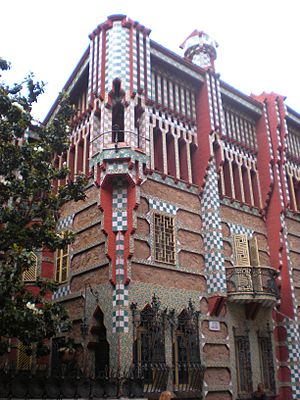 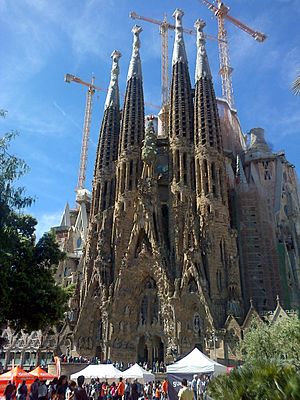 Antoni Gaudí i Cornet (25 June 1852 – 10 June 1926) was a Spanish architect. He was born in Reus, in Catalonia, and became a leader of Catalan modernism. Gaudí's works are in his own distinctive style. Most are in the Catalan capital of Barcelona, especially his greatest work, the Sagrada Família.

He got some ideas from neo-Gothic art, Art Deco and Oriental techniques, and became part of the modernist movement in the late 19th and early 20th centuries.

Between 1984 and 2005, seven of his works were declared World Heritage Sites by UNESCO. The seven works were: the Park Güell, the Palau Güell and the Casa Milà; the Nativity facade, the crypt and the apse of the Sagrada Família, the Casa Vicens and the Casa Batlló in Barcelona, and the crypt of the Colònia Güell in Santa Coloma de Cervelló.

Gaudí's Roman Catholic faith intensified during his life and religious images permeate his work. This earned him the nickname "God's Architect", and eventually led to his beatification in 2011.

His work had an organic style inspired by nature. Gaudí rarely drew detailed plans of his works, instead preferring to create them as three-dimensional scale models and molding the details as he was conceiving them.

All content from Kiddle encyclopedia articles (including the article images and facts) can be freely used under Attribution-ShareAlike license, unless stated otherwise. Cite this article:
Antoni Gaudí Facts for Kids. Kiddle Encyclopedia.