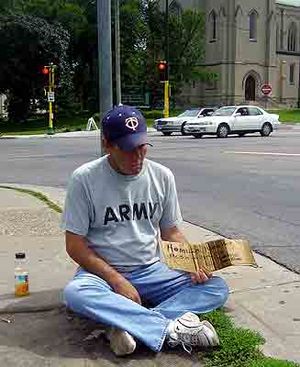 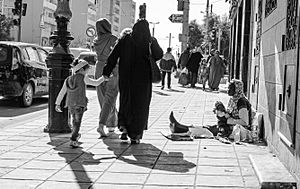 Sub-Saharan woman begging with her baby in Algeria

Begging means asking people for money, food, shelter or other things, when one is not able to give anything instead.

In larger cities, it is common to see beggars who ask for money, food, or other items. Typically, beggars often beg for spare change using coffee cups, mugs, small boxes, hats, or other items into which monies can be placed and sometimes display signs with messages such as "Help me. I'm homeless."

All content from Kiddle encyclopedia articles (including the article images and facts) can be freely used under Attribution-ShareAlike license, unless stated otherwise. Cite this article:
Begging Facts for Kids. Kiddle Encyclopedia.