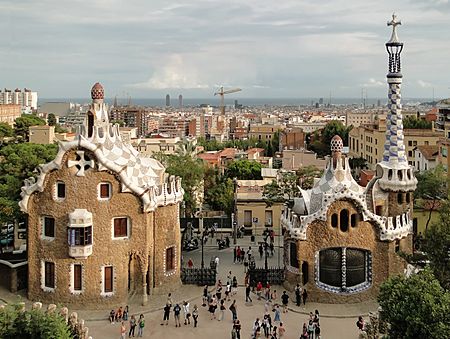 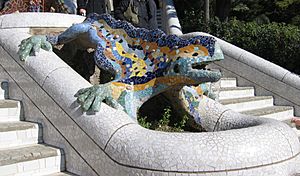 Gaudí's multicolored mosaic salamander, popularly known as "el drac" (the dragon), at the main entrance, as restored after the vandalism of February 2007

The Park Güell (Catalan: Parc Güell) is a public park system of gardens and architectonic elements. It is located on Carmelo Hill, in Barcelona (Spain). Carmelo Hill belongs to the mountain range of Sierra de Collserola — the Parque del Carmelo (Catalan: Parc del Carmel) is located on the northern face. Park Güell is located in La Salut, a neighborhood in the Gràcia district of Barcelona. With urbanization in mind, Eusebi Güell gave the design of the park to architect Antoni Gaudí. He designed the park in the Catalonian modernism style. The park was built between 1900 and 1914. It opened as a public park in 1926.

In 1984, UNESCO declared the park a World Heritage Site under “Works of Antoni Gaudí”. Park Güell was one of 100 finalists for the 12 Treasures of Spain in 2007.

All content from Kiddle encyclopedia articles (including the article images and facts) can be freely used under Attribution-ShareAlike license, unless stated otherwise. Cite this article:
Park Güell Facts for Kids. Kiddle Encyclopedia.