Baldwin Hills is a neighborhood within the South Los Angeles region of Los Angeles California. It is home to Kenneth Hahn State Regional Park and to Village Green, a National Historic Landmark. As of end of 2020, Baldwin Hills ranks number two among top 10 richest black communities in US, with an average family income of $157,033, and it has been nicknamed as Black Beverly Hills after black musicians and actors have moved into the area.

The landform Baldwin Hills have long been drilled for petroleum with active oil wells in the mid-hills along La Cienega Boulevard. As the oil fields close, some of the otherwise undeveloped land is being acquired by agencies for the public's benefit. The Kenneth Hahn State Recreation Area is a major jewel enhancing the community with park activities and recreation. The headwaters of Ballona Creek are in the hills and park which then flows west into the Santa Monica Bay. 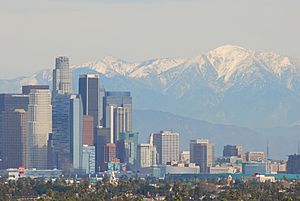 View from Baldwin Hills of Downtown Los Angeles in the distance and the San Gabriel Mountains.

Communities and sub-divisions in Baldwin Hills include: 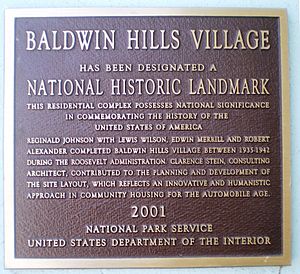 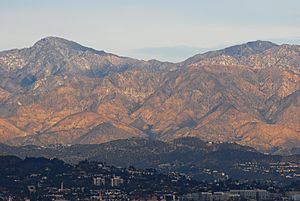 The Baldwin Hills population was 78.5% African American in the 2000 U.S Census population.

Baldwin Hills is among the wealthiest majority-black communities in the United States. Prior to 1965 and restrictive covenants being eliminated, it was known as "Pill Hill" because a large number of doctors and psychologist seemed to live in the neighborhood. 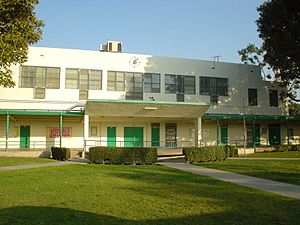 All content from Kiddle encyclopedia articles (including the article images and facts) can be freely used under Attribution-ShareAlike license, unless stated otherwise. Cite this article:
Baldwin Hills, Los Angeles Facts for Kids. Kiddle Encyclopedia.