Developed in the 1920s as a mainly residential community, it features Spanish Colonial Revival homes and tree-lined streets. The Life Magazine/Leimert Park House is a Los Angeles Historic Cultural Monument.

The core of Leimert Park is Leimert Park Village, which consists of Leimert Plaza Park, shops on 43rd Street and on Degnan Boulevard, and the Vision Theater. The village has become the center of both historical and contemporary African-American art, music, and culture in Los Angeles. 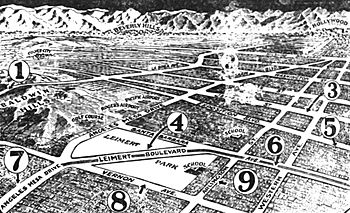 Leimert Park is named for its developer, Walter H. Leimert, who began the subdivision business center project in 1928. He had the master plan designed by the landscape architecture firm of the Olmsted Brothers company which was managed by the sons of Frederick Law Olmsted (1822–1903), the landscape designer known for Central Park in New York City and other major projects. Leimert Park was one of the first comprehensively planned communities in Southern California to be designed for upper and middle-income families. It was considered a model of urban planning for its time: automobile traffic near schools and churches was minimized, utility wires were buried or hidden from view in alleys, and densely planted trees lined its streets. Walter Leimert envisioned a self-sufficient commercial district community, with a town square, movie theater, transportation, and retail shopping. Leimert Park was considered a desirable community, and one of the first to have a Home Owners' Association (HOA).

Elderly Japanese-American residents still live in the area and some of the Japanese gardens still exist. The Crenshaw Square Shopping Center was inspired and designed in the style of Japanese architecture. The center was a hub of retailing in the mid 1950s.

In 2013 and 2014, resurgent home prices in South Los Angeles spurred much interest among many young professionals into moving into Leimert Park and among other areas within the region. Observers took note with mixed feelings: fears of gentrification and hope for increased business investment. 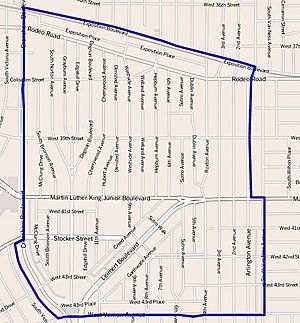 Leimert Park boundaries as mapped by the Los Angeles Times

According to the Los Angeles Times Mapping L.A. project: Leimert Park is bounded by Exposition Boulevard on the north, South Van Ness Avenue and Arlington Avenue on the east, West Vernon Avenue on the south, and Victoria Avenue and Crenshaw Boulevard on the west. Jefferson Park is to the north, the Exposition Park neighborhood and Vermont Square are to the east, Hyde Park to the south and View Park-Windsor Hills and Baldwin Hills/Crenshaw to the west. Leimert Park angles to the West Adams district on the northwest.

According to the books "Leimert Park (Images of America)" and "Los Angeles Residential Architecture", Leimert Park was established with the following boundaries: Martin Luther King, Jr. Blvd. (formerly Santa Barbara Avenue) on the north, Arlington on the east, Vernon to the south and Crenshaw Boulevard (formerly Angeles Mesa Drive) on the west.

In 2005, a "Leimert Park Village" brick gateway marker was installed.

A total of 11,782 people lived in Leimert Park according to the 2000 U.S. census— counted 9,880 residents in the 1.19 square-mile neighborhood, about the same as the population density in the city as a whole. The median age was 38, considered old as opposed to the rest of the city. The percentage of residents aged 65 and above was among the county's highest.

Within the neighborhood, African Americans made up 79.6% of the population, with Latinos at 11.4%, Asians at 4.9%, White at 1.5%, and other races at 3.2%. El Salvador and Mexico were the most common places of birth for the 10.7% of the residents who were born abroad. This is a low percentage of foreign-born when compared with the overall city or Los Angeles County.

The median household income in 2008 dollars was $45,865, considered average for the city but low for the county. The percentage of households earning $20,000 or less was high, compared to the county at large. The average household size of 2.2 people was low for both the city and the county. Renters occupied 54.1% of the housing units, and homeowners occupied the rest.

In 2000 there were 817 families headed by single parents, or 27.7%, a rate that was high for the city and the county. There were 990 veterans, or 11.1% of the population, considered high when compared with the city overall. The percentage of veterans who served in the Vietnam War was among the county's highest. 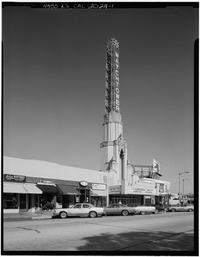 The core of Leimert Park is Leimert Park Village (alternately called Historic Leimert Park Village), which consists of Leimert Plaza Park, two blocks of 43rd Street, and one block of Degnan Boulevard. Leimert Park Village has historically served as a hub of African-American art and culture in Los Angeles, has been compared to both Harlem and Greenwich Village, and in 1998 was seen as "the cultural heartbeat of black Los Angeles." The Leimert Park station of the Crenshaw/LAX Line line is under construction. Leimert Plaza Park was designed by the Olmsted Brothers to serve as the public hub of the master planned community. The park has been a go-to community space for the African American community since the 1980s hosting art walks, a regular drum circle, annual celebrations, rallies, protests, and memorials.

April 21, 2019 marked the 87th anniversary of the opening of the Vision Theatre (initially named the Leimert). This Mediterranean Revival Style theater is at the south end of Leimert Park Village at 3341 West Forty-Third place and Degnan Avenue. It was designed in 1931 by the architectural firm Morgan, Walls & Clements and opened as a movie theater on April 21, 1932.

In 1977 the theater became a Jehovah's Witness Chapel known as the Watchtower. Actress Marla Gibbs bought the theater in 1990 and renamed it the Vision Theatre, intending to make it a venue for African-American movies, live theater, and dance productions. In 1992 the Los Angeles civil unrest and an economic recession hit the area hard, and the property fell into foreclosure. The City of Los Angeles acquired the theater in 1999. The Department of Cultural Affairs manages the theater with the goal of providing a performing arts venue for professional performing arts presentations; a training center for talent reflective of South Los Angeles; and a venue for the production and presentation of world-class theater, music, and dance performances.

The first phase of renovations to the Vision Theatre included upgrades to the lobbies, restrooms, office space, and classrooms in 2011. Phase II of the renovation began in March 2018. The rehabilitation of the remaining portions of the theater includes the historic refurbishment and expansion of the theater and auditorium, and the addition of an orchestra pit and a fly loft. The grand reopening of the Vision Theatre is planned for 2021.

The Leimert Park Book Fair began in 2007 and attracts "more than 200 authors, poets, spoken-word artists, storytellers and other participants."

Sankofa Park will anchor the northern end of Destination Crenshaw, an open-air museum of African American history and culture that will extend 1.3-miles (2.1 km) down Crenshaw Boulevard through the Hyde Park neighborhood.

The village has blues and jazz night clubs, theaters for musicals, dramatic performances, award ceremonies, comedy specials, and poetry readings, and venues for hip hop. Project Blowed is the longest-running hip hop open mic in the world, started in 1994 by rapper Aceyalone and friends. It is hosted by Kaos Network, and held every Thursday night at 43rd Place and Leimert Boulevard. 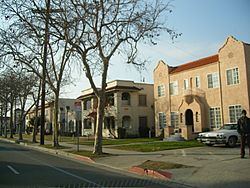 The Lucy Florence Coffee House and Cultural Center was established in Leimert Park in early 1996; it hosted an array of talent, art, restaurant and music. Lucy Florence was at 3351 West 43rd Street and Degnan Avenue. It was owned by Richard and Ron Harris, also known as the Aswirl Twins on America's Next Top Model. The coffee house was named after their mother, Lucy Florence, on her 75th birthday; it was then located in the Hollywood neighborhood. In January 2012, Lucy Florence coffee shop closed in Leimert Park.

Another famous jazz venue is 5th Street Dick's Coffee and Jazz Emporium, founded by Richard Fulton in 1992. Fulton died on March 18, 2000. It continues to be a mainstay for jazz music lovers, professional chess players, poets and famous comedians.

In 2014, construction was under way on the Leimert Park station, on the Los Angeles Metro light rail Crenshaw/LAX Line near the intersection of Crenshaw Boulevard and Vernon Avenue. Nearby Leimert Plaza Park was planned to be part of a new walkable corridor with a direct entrance into the station. It would also have new parking structures. A section of 43rd Place would be closed to car traffic and converted to a public plaza.

All content from Kiddle encyclopedia articles (including the article images and facts) can be freely used under Attribution-ShareAlike license, unless stated otherwise. Cite this article:
Leimert Park, Los Angeles Facts for Kids. Kiddle Encyclopedia.