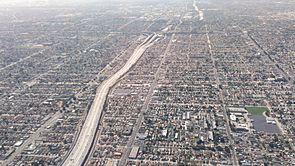 Aerial view of the junction of the 110 and the 105 freeways.

In the 2000 census, the area of South Los Angeles had a population of 520,461. Roughly 55% of the residents were Hispanic or Latino, while more than 40% were African American.The South Los Angeles region consists of:

South L.A. is home to the University of Southern California, founded in 1880, as well as the Doheny Campus of Mount St. Mary's College, which was founded in 1920. The 1932 and 1984 Olympic Games took place near the USC campus at neighboring Exposition Park, which hosts the Los Angeles Coliseum. Until the 1920s, West Adams was one of the most desirable areas of the city. Then development of the Wilshire Boulevard corridor drew Los Angeles' development west of downtown. As the wealthy were building stately mansions in West Adams and Jefferson Park, the white working class was establishing itself in Crenshaw and Hyde Park. Affluent blacks gradually moved into West Adams and Jefferson Park as the decades passed.

At the same time, the area of modest bungalows and low-rise commercial buildings along Central Avenue emerged as the heart of the black community in southern California. It had one of the first jazz scenes in the western U.S., with trombonist Kid Ory a prominent resident. Under racially restrictive covenants, blacks were allowed to own property only within the Main-Slauson-Alameda-Washington box and in Watts, as well as in small enclaves elsewhere in the city. The working- and middle-class blacks who poured into Los Angeles during the Great Depression and in search of jobs during World War II found themselves penned into what was becoming a severely overcrowded neighborhood. During the war, blacks faced such dire housing shortages that the Housing Authority of the City of Los Angeles built the virtually all-black and Latino Pueblo Del Rio project, designed by Richard Neutra.

When the Supreme Court banned the legal enforcement of race-oriented restrictive covenants in 1948's Shelley v. Kraemer, blacks began to move into areas outside the increasingly overcrowded Slauson-Alameda-Washington-Main settlement area. For a time in the early 1950s, southern Los Angeles became the site of significant racial violence, with whites bombing, firing into, and burning crosses on the lawns of homes purchased by black families south of Slauson. In an escalation of behavior that began in the 1920s, white gangs in nearby cities such as South Gate and Huntington Park routinely accosted blacks who traveled through white areas. The black mutual protection clubs that formed in response to these assaults became the basis of the region's fearsome street gangs.

As in most urban areas, 1950s freeway construction radically altered the geography of southern Los Angeles. Freeway routes tended to reinforce traditional segregation lines. The Harbor Freeway ran just to the west of Main Street, and the Santa Monica Freeway just to the north of Washington Boulevard. The Marina Freeway was originally to run near Slauson Avenue all the way to the Orange County line, but was deemed redundant and went unbuilt except for its westernmost portions.

Although the freeways worked in moving cars around, they were decidedly unsuccessful as instruments of integration. The explosive growth of suburbs, most of which barred blacks by a variety of methods, provided the opportunity for whites in neighborhoods bordering black districts to leave en masse. The spread of blacks throughout the area was achieved in large part through "blockbusting," a technique whereby real estate speculators would buy a home on an all-white street, sell or rent it to a black family, and then buy up the remaining homes from whites at cut-rate prices and sell them at a hefty profit to housing-hungry blacks.

This process accelerated after the Watts Riots of 1965. The riots resulted in an abandonment of southern Los Angeles and its neighboring cities by white residents and merchants. Middle-class blacks also left the area, moving to the north and west. By the late 1960s most of Los Angeles south of Pico Boulevard and east of La Brea Avenue had become overwhelmingly black. The Santa Monica Freeway formed the northern boundary of the "new" South Central, primarily dividing the middle-class blacks of Mid-Wilshire from the poor and working-class blacks to the south.

Beginning in the 1970s, the precipitous decline of the area's manufacturing base resulted in a loss of the jobs that had allowed skilled union workers to have a middle class life. Downtown Los Angeles' service sector, which had long been dominated by unionized African Americans earning relatively high wages, replaced most black workers with newly arrived Mexican and Central American immigrants.

Widespread unemployment, poverty and street crime contributed to the rise of street gangs in South Central, such as the Crips and Bloods.

By the 2000s, the crime rate of South L.A. has lowered significantly. In mid 2003, the City of Los Angeles officially changed the region's name from South Central to South Los Angeles.

By the end of the 1980s, South Los Angeles had an increasing number of Hispanics and Latinos, mostly in the northeastern section of the region.

"Between 1970 and 1990 the South LA area went from 80% black and 9% Latino to 50.3% black and 44% Latino." This massive and rapid residential demographic change occurred as resources in the area were shrinking due to global economic restructuring described above and due to the federal government's decrease in funding of urban anti-poverty and jobs programs, and other vital social services like healthcare. The socio-economic context described here increased the perception and the reality of competition amongst Asians, blacks, and Latinos in South LA. The results from the 2000 census which show continuing demographic change coupled with recent economic trends indicating a deterioration of conditions in South LA suggest that such competition will not soon ease."

In the 2000 census, the area of South Los Angeles had a population of 520,461. Roughly 55% of the residents were Hispanic or Latino, while more than 40% were African American.

In the 2010 census, the area of South Los Angeles had a population of 169,453. Roughly 74% of the residents were Hispanic or Latino, nearly 25% were African American. 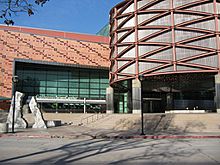 An image of the California Science Center 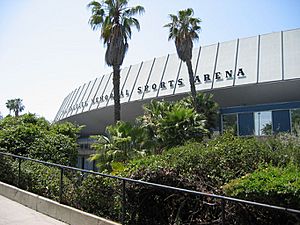 An image of the former Los Angeles Memorial Sports Arena

All content from Kiddle encyclopedia articles (including the article images and facts) can be freely used under Attribution-ShareAlike license, unless stated otherwise. Cite this article:
South Los Angeles Facts for Kids. Kiddle Encyclopedia.