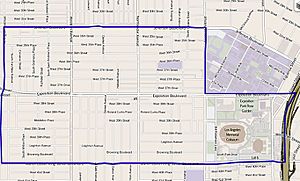 Exposition Park neighborhood boundaries of the city of Los Angeles, as mapped by the Los Angeles Times 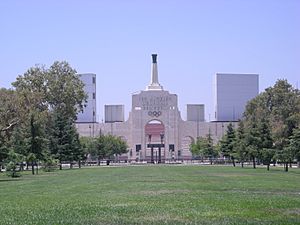 According to the Mapping L.A. project of the Los Angeles Times, The Exposition Park 1.85-square-mile neighborhood is flanked by Adams-Normandie on the north, University Park on the northeast, Historic South Central on the east, Vermont Square on the south, and Hyde Park and Leimert Park on the west. It is bounded by Jefferson Boulevard on the north, Vermont Avenue on the east, Martin Luther King Jr. Boulevard on the south and Arlington Avenue on the west, to which is added all of Exposition Park and additional land along both sides of Figueroa Street east and Exit 20A of the Harbor Freeway.

A total of 31,062 residents counted in its 1.85 square miles, which is including the park and Los Angeles Memorial Coliseum as well according to the 2000 U.S. census—an average of 16,819 people per square mile among the highest population densities for both the city and the county. By 2008 the population had increased to 33,458, the city has estimated.

Within the neighborhood, Latinos made up 36.9% of the population, while African American were at 38,1%— both considered high percentages for the county. Other ethnicities were White, 2.2%; Asian, 1.6%; and other, 2%. Mexico and El Salvador were the most common places of birth for the 38.5% of the residents who were born abroad, an average percentage of foreign-born when compared with the city as a whole.

The median household income in 2008 dollars was $33,999, considered low for both the city and county. The percentage of households earning $20,000 or less was high, compared to the county at large. The average household size of 3.3 people was about the same as in the city at large. Renters occupied 69% of the housing units, and homeowners occupied the rest. The percentages of never-married people were among the county's highest—45.5% for men and 39.1% for women. 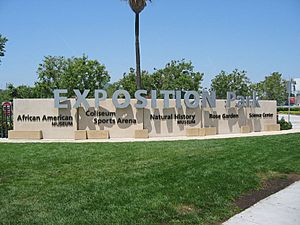 All content from Kiddle encyclopedia articles (including the article images and facts) can be freely used under Attribution-ShareAlike license, unless stated otherwise. Cite this article:
Exposition Park, Los Angeles Facts for Kids. Kiddle Encyclopedia.