The Exposition Park Rose Garden is a historic 7-acre (28,000 m2) sunken garden located in Exposition Park in Los Angeles, California. It has been called "one of the city's best-kept secrets". It was added to the National Register of Historic Places in 1991.

Establishment of the rose garden

In 1936, four large marble statues by Danish sculptor Thyra Boldsen were installed on pedestals at the four corners of the garden. The statues were titled "Nymph Finding Pipes of Pan," "The Blessing" (dedicated to the mothers of the world), "The Start" (awarded first prize by the Danish Academy of Fine Arts), and "Terpsichore" (or "Melody of Life"). The sculptor explained her intent with the statues this way: "In conceiving and executing these four figures dedicated to womanhood and motherhood, I have had in mind that men for centuries have erected statues symbolizing bravery—these symbolize love, life and joy."

Popularity of the Rose Garden 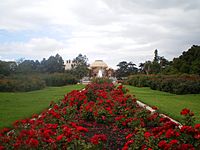 In the 1950s, the annual pruning demonstration drew thousands of rose enthusiasts to the park. By the mid-1980s, the garden had more than 20,000 rose bushes and more than 200 varieties of roses. The All-America Rose Selection, a rose growers organization, began donating its Rose of the Year to the garden in 1940. The garden is reportedly visited by more than a million people a year and is a popular location for weddings, reflection, and other events. The garden also has four gazebos, several statues, and a central fountain. The garden is located adjacent to the University of Southern California campus, the Natural History Museum of Los Angeles County, and the California Science Center.

Threat to the Rose Garden and historic designation

In 1986, plans to dig up the garden to build an underground parking garage led to protests in the media. The Los Angeles Times ran an editorial opposing the plan: "There are times when the leaders of Los Angeles seem perversely intent on living up to the image that many outsiders have of them—insensitive and uncouth rabbits who would, say, dig up a garden to put in a parking lot." The garden had also been threatened by an earlier proposal by the Los Angeles Raiders football team to convert the garden into a practice field for the team. In order to protect the garden from such threats, it was added to the National Register of Historic Places in 1991.

The exterior of the Old Armory Building, abutting the eastern edge of the Rose Garden, is used in establishing shots of the fictional Jeffersonian Institute, in the TV series Bones.

The gardens were used also for The TV show “Buffy The Vampire Slayer” in the Season two episode “Inca Mummy Girl”.

The garden can also be seen at the end of the Barbra Streisand film On a Clear Day You Can See Forever .

Jane Fonda and Don Johnson characters, in the 2018 film, Book Club frolic in the rose garden fountain during a date scene.

All content from Kiddle encyclopedia articles (including the article images and facts) can be freely used under Attribution-ShareAlike license, unless stated otherwise. Cite this article:
Exposition Park Rose Garden Facts for Kids. Kiddle Encyclopedia.