Kids Encyclopedia Facts
Not to be confused with California Academy of Sciences or California Institute of Science.

Admission includes access to the permanent exhibits, such as the Space Shuttle Endeavour and other prominent aircraft and spacecraft, and to various demonstrations. A separate ticket is required for the IMAX movies, most special traveling exhibitions, and special activities that include a climbing wall, motion simulator, and a high-wire bicycle.

The Center has been accredited by the American Alliance of Museums and the Association of Zoos and Aquariums, and is a member of the Association of Science and Technology Centers. The museum is also an affiliate in the Smithsonian Affiliations program.

The two-story, 45,000-square-foot exhibit features display zones with live animals and aquariums about wildlife and adaptation in different ecosystems, including a river, desert, polar region, deep sea, ocean, island and urban areas, as well as the entire planet Earth.

An area with hands-on activities and exhibits that explore innovation and invention, with themes involving construction, energy and transportation.

Examines the processes of life and similarities among organisms, including food, body organs like the heart and brain, senses, defenses against threats, how living things reproduce which includes a hatching chick display, DNA, and microscopic organisms. 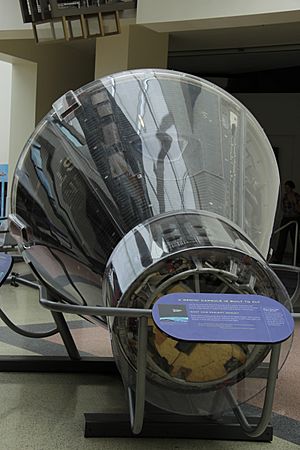 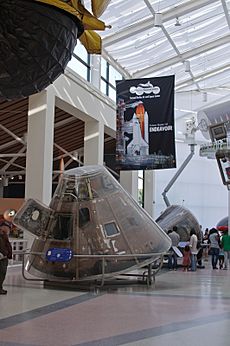 The museum's history dates back to the first California State Exhibition building, which opened in Exposition Park in Los Angeles in 1912, the site of an agricultural fairground from 1872 to 1910. The brick and terra cotta building, designed by William D. Coates, Jr., state architect, and N. Ellery, state engineer, displayed agriculturally-based natural resources and industrial products from across the state, including ranching, fish and game, coal mining, gold mining, oil production, and lumbering, as well as some of the state's recreational attractions. After World War II, the building also featured exhibits about state science and technology industries.

California Museum of Science and Industry

In 1951, the exhibition became the "California Museum of Science and Industry". The State Exhibition building was renamed in honor of major donor and trustee Howard F. Ahmanson as the Howard F. Ahmanson Building. The hands-on interactive exhibits included themes on agriculture, transportation, electricity, energy, industries, and minerals.

In 1961, the museum opened a new science wing that featured "Mathematica: A World of Numbers... and Beyond", an exhibit sponsored by IBM and designed by Charles and Ray Eames to visually demonstrate fundamental mathematical concepts. Interaction stations demonstrated different concepts including celestial mechanics, the Möbius strip, multiplication, symmetry, and projective geometry. The original exhibit closed in 1998, and is now on display at the New York Hall of Science.

In preparation for the 1984 Summer Olympics, the museum added new exhibits on earthquakes and economics, and an IMAX theatre. The opening and closing ceremonies for the games were held in the Los Angeles Memorial Coliseum, which is adjacent to the museum.

In 1994, the museum's building was damaged by the Northridge earthquake. The California Museum of Science and Industry closed in 1996 to prepare for a new facility. 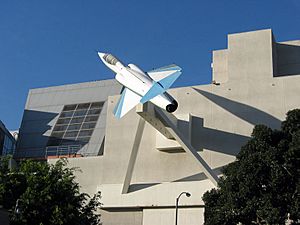 The "California Aerospace Museum" was also opened in 1984 adjacent to and operated by the California Museum of Science and Industry to coincide with the Summer Olympics. It was also known as Aerospace Hall but also commonly known as the California Air and Space Museum/Gallery and the SKETCH Foundation Gallery, and was the first major public work of architect Frank Gehry. The museum focused on the State's history as a leader in the aviation and aerospace industries and featured a giant, hangar-like space with aircraft and space vehicles and artifacts.

The building, now known as the Air and Space Gallery, was closed in 2011. In 2012 the building was listed on the California Register of Historical Resources, but its future is unknown.

In 1988 the museum's leadership began a to develop a three-phase, 25-year master plan to transform the institution from a science museum to a science education facility. This new facility would be known as the California Science Center. The original museum building closed its doors in 1996 to prepare for the new construction. 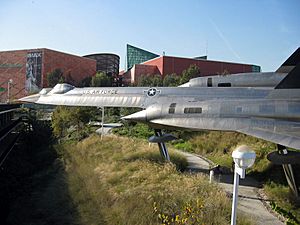 Lockheed A-12 "Archangel," nicknamed "Titanium Goose," on display outside the California Science Center

Phase I was completed and opened in 1998, when the museum was opened and officially renamed the California Science Center.

All content from Kiddle encyclopedia articles (including the article images and facts) can be freely used under Attribution-ShareAlike license, unless stated otherwise. Cite this article:
California Science Center Facts for Kids. Kiddle Encyclopedia.