The Natural History Museum of Los Angeles County is the largest natural and historical museum in the western United States. Its collections include nearly 35 million specimens and artifacts and cover 4.5 billion years of history. This large collection is comprised not only of specimens for exhibition, but also of vast research collections housed on and offsite.

The museum is associated with two other museums in Greater Los Angeles: the Page Museum at the La Brea Tar Pits in Hancock Park and the William S. Hart Ranch and Museum in Newhall. The three museums work together to achieve their common mission: "to inspire wonder, discovery, and responsibility for our natural and cultural worlds." 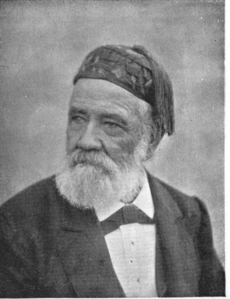 Considered one of the first preservationists in Los Angeles, Californio politician Antonio F. Coronel's donations formed the original collection of the museum. 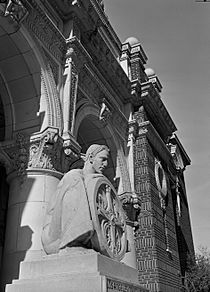 Old east door of The Natural History Museum in 1956

NHM opened in Exposition Park, Los Angeles, California, United States in 1913 as The Museum of History, Science, and Art. The moving force behind it was a museum association founded in 1910. Its distinctive main building with fitted marble walls and domed and colonnaded rotunda, is on The National Register of Historic Places. Additional wings opened in 1925, 1930, 1960, and 1976. 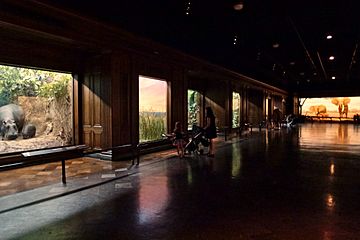 In 2003, the museum began a campaign to transform its exhibits and visitor experience. The museum reopened its seismically retrofitted renovated 1913 rotunda, along with the new Age of Mammals exhibition. in 2010. Its Dinosaur Hall opened in July 2011. A new Los Angeles history exhibition, Becoming Los Angeles, opened in 2013. The outdoor Nature Gardens and Nature Lab, which explore L.A. wildlife, also opened in 2013. 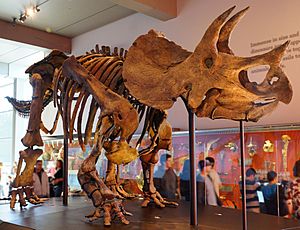 The museum maintains research and collections in the following fields:

The museum has three floors of permanent exhibits. Among the most popular museum displays are those devoted to animal habitats, dinosaurs, pre-Columbian cultures, The Ralph M. Parsons Discovery Center and Insect Zoo, and the new Nature Lab, which explores urban wildlife in Southern California.

The museum's collections are strong in many fields, but the mineralogy and Pleistocene paleontology are the most esteemed, the latter thanks to the wealth of specimens collected from The La Brea Tar Pits.

The museum has almost 30 million specimens representing marine zoology. These include one of the largest collections of marine mammal remains in the world, housed in a warehouse off site, which at over 5,000 specimens is second in size only to that of The Smithsonian.

The museum's collection of historical documents is held in The Seaver Center for Western History Research.

The museum hosts regular special exhibitions which augment its collections and advance its mission. Recent special exhibits have included Mummies and Pterosaurs.

The museum also hosts a butterfly pavilion outside every spring and summer and a spider pavilion on the same site in the fall. 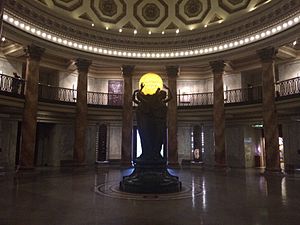 Over the years, the museum has built additions onto its original building. Originally dedicated when The Natural History Museum opened its doors in 1913, the rotunda is one of the museum's most elegant and popular spaces. Lined with marble columns and crowned by a stained glass dome, the room is also the home of the very first piece of public art funded by Los Angeles County, a Beaux-Arts statue by Julia Bracken Wendt entitled Three Muses, or History, Science and Art. This hall is among the most distinctive locales in Los Angeles and has often been used as a filming location.

All content from Kiddle encyclopedia articles (including the article images and facts) can be freely used under Attribution-ShareAlike license, unless stated otherwise. Cite this article:
Natural History Museum of Los Angeles County Facts for Kids. Kiddle Encyclopedia.