Vermont Square is a 2.54-square-mile neighborhood in Los Angeles, California, within the South Los Angeles region. It is notable for its dense concentration of residents, their youthful age range, their high ratio of single to married parents and their low median household income. It is the site of Manual Arts High School and the Barack Obama Global Preparatory Academy. 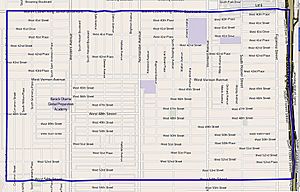 Vermont Square as outlined by the Los Angeles Times 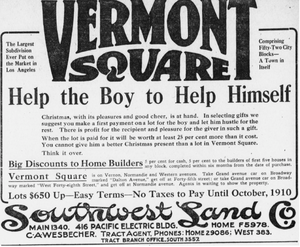 Advertisement for tract sales, Los Angeles Herald, 1909, "The largest subdivision ever put on the market in Los Angeles" 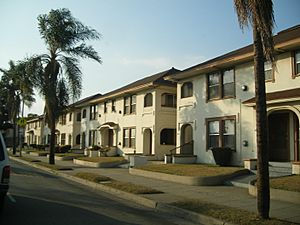 A total of 42,284 people lived in Vermont Square's 2.54 square miles, according to the 2000 U.S. census—averaging 17,798 people per square mile, among the highest population densities in the city as a whole. Population was estimated at 47,555 in 2008. The median age was 26, considered young when compared to the city as a whole. The percentages of young residents, aged birth to 18, were among the county's highest.

Within the neighborhood, Latinos made up 58.5% of the population, with black people at 39.2%, whites 1.4%, Asian 1.1%, and other 1.8%. Mexico and El Salvador were the most common places of birth for the 38.5% of the residents who were born abroad, an average percentage of foreign-born when compared with the city or county as a whole.

The $29,904 median household income in 2008 dollars was considered low for the city and county. The percentage of households earning $20,000 or less was high, compared to the county at large. The average household size of 3.4 people was high for the city. Renters occupied 63.2% of the housing units, and homeowners occupied the rest. 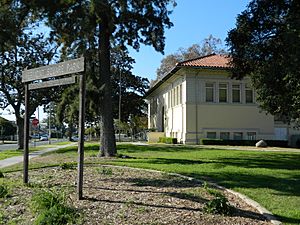 All content from Kiddle encyclopedia articles (including the article images and facts) can be freely used under Attribution-ShareAlike license, unless stated otherwise. Cite this article:
Vermont Square, Los Angeles Facts for Kids. Kiddle Encyclopedia.