Chesterfield Square is a 0.63-square-mile neighborhood in Los Angeles, California, located within the South Los Angeles region. It contains its namesake park, along with the Van Ness Recreation Center.

The neighborhood is a mix of low-density commercial, industrial, and residential development with characteristic bungalow houses.

It is notable within the city for the relatively low percentage of its 6,000+ residents born outside the United States, for being in first place for the number of violent crimes committed of areas of Los Angeles and for the fact that the percentage of veterans who served during World War II and the Korean War is among the county's highest. 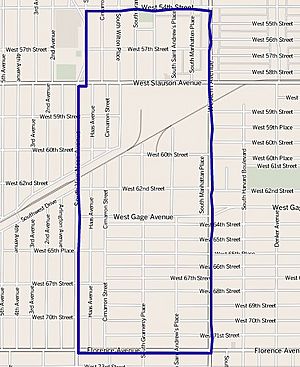 Chesterfield Square district of the city of Los Angeles, as drawn by the Los Angeles Times

Relation of Chesterfield Square to other communities:

A total of 6,062 people lived in Chesterfield Square's 0.63 square miles, according to the 2000 U.S. census—averaging 9,571 people per square mile, about the average population density for both the city and the county.

The median age was 31, about average for the city and the county, but the percentages of residents aged 10 or younger or 11 to 18 were among the county's highest. There were 406 families headed by single parents; the rate of 29.8% was the fourth-highest among city neighborhoods.

Within the neighborhood, African Americans made up 58.6% of the population—considered a high percentage for the county—while Latinos were 36.9%. Other ethnicities were White, 1.5%; Asian, 0.8%; and other, 2.2%. Mexico and El Salvador were the most common places of birth for the 23.4% of the residents who were born abroad, considered to be a low percentage of foreign-born when compared with the city as a whole.

The median household income in 2008 dollars was $37,737, considered low for both the city and county. The percentage of households earning $20,000 or less was high, compared to the county at large. The average household size of three people was about average. Renters occupied 49.4% of the housing units, and homeowners occupied the rest.

The 2000 census counted 298 veterans, of whom 164 served in World War II or the Korean War, a percentage that was among the county's highest.

Only 6% of Chesterfield Square residents 25 and older held a four-year degree, a low percentage for both the city and the county.

The schools that serve the boundaries of Chesterfield Square are:

All content from Kiddle encyclopedia articles (including the article images and facts) can be freely used under Attribution-ShareAlike license, unless stated otherwise. Cite this article:
Chesterfield Square, Los Angeles Facts for Kids. Kiddle Encyclopedia.