West Adams is a historic neighborhood in the South Los Angeles region of Los Angeles, California. The area is known for its large number of historic buildings, structures and notable houses and mansions throughout Los Angeles. It is a youthful, densely populated area with a high percentage of African American and Latino residents. The neighborhood has several public schools and private schools.

West Adams boundaries as outlined by the Los Angeles Times 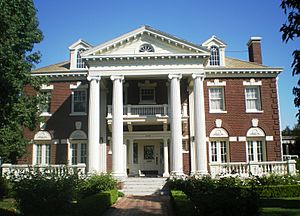 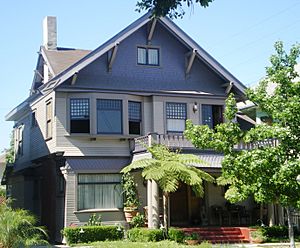 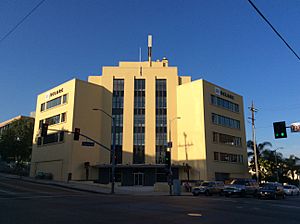 West Adams is one of the oldest neighborhoods in the city of Los Angeles, with most of its buildings erected between 1880 and 1925, including the William Andrews Clark Memorial Library. West Adams was developed by railroad magnate Henry E. Huntington and wealthy industrialist Hulett C. Merritt of Pasadena. It was once the wealthiest district in the city, with its Victorian mansions and sturdy Craftsman bungalows, and a home to Downtown businessmen and professors and academicians at USC. Several historic areas of West Adams, namely, Harvard Heights, Lafayette Square, Pico-Union, and West Adams Terrace, were designated as Historic Preservation Overlay Zones by the city of Los Angeles, in recognition of their outstanding architectural heritage. Menlo Avenue-West Twenty-ninth Street Historic District, North University Park Historic District, Twentieth Street Historic District, Van Buren Place Historic District and St. James Park Historic District, all with houses of architectural significance, are located in West Adams.

The development of the West Side, Beverly Hills and Hollywood, beginning in the 1910s, siphoned away much of West Adams' upper-class white population; upper-class blacks began to move in around this time, although the district was off limits to all but the very wealthiest African-Americans. One symbol of the area's emergence as a center of black wealth at this time is the landmark 1949 headquarters building of the Golden State Mutual Life Insurance Company, a late-period Moderne structure at Adams and Western designed by renowned black architect Paul Williams. It housed what was once one of the nation's largest black-owned insurers (currently, along with an adjacent new building, it is now a campus for a large non-profit). West Adams' transformation into an affluent black area was sped by the Supreme Court's 1948 invalidation of segregationist covenants on property ownership. The area was a favorite among black celebrities in the 1940s and 1950s; notable residents included Hattie McDaniel, Tim Moore, Joe Louis, Sweet Daddy Grace, Little Richard, Lionel Hampton and Ray Charles.

Many African-American gays have moved into the neighborhood, and it has become the center of black gay life in Los Angeles, even earning the nickname of "the black West Hollywood" or "the black Silver Lake" Many of the neighborhoods are experiencing a renaissance of sorts with their historic houses being restored to their previous elegance.

In total, more than 70 sites in West Adams have received recognition as a Los Angeles Historic-Cultural Monument, a California Historical Landmark, or listing on the National Register of Historic Places.

According to the Mapping L.A. project of the Los Angeles Times, a total of 21,764 people lived in West Adams's 1.48 square miles, according to the 2000 U.S. census—averaging 14,686 people per square mile, among the highest population densities in the city as a whole. Population was estimated at 22,857 in 2008. The median age was 28, considered young when compared to the city as a whole. The percentages of residents aged birth to 18 were among the county's highest.

Latinos made up 56.2% of the population, with black people at 37.6%, white people 2.4%, Asian 1.7%, and other 2%. Mexico and El Salvador were the most common places of birth for the 36.9% of the residents who were born abroad, an average percentage of foreign-born when compared with the city or county as a whole.

The $38,209 median household income in 2008 dollars was considered low for the city and county. The percentage of households earning $20,000 or less was high, compared to the county at large. The average household size of 3.1 people was about average for the city. Renters occupied 62.8% of the housing units, and homeowners occupied the rest.

According to the "Mapping L.A." project of the Los Angeles Times, West Adams is flanked by Mid-City to the north—across the Santa Monica Freeway—Jefferson Park to the east, Baldwin Hills/Crenshaw to the south and Palms to the west. The neighborhood's street boundaries are the Santa Monica Freeway on the north, Crenshaw Boulevard on the east, Exposition and Jefferson boulevards on the south and the Culver City line on the west (Ballona Creek and Fairfax Avenue).

Project leader Doug Smith reported that, in response by the public to advance posting of the proposed maps, "Among the bitter rifts we encountered were the competing claims to the name West Adams."

Historical purists would reserve the designation West Adams for the once-upper-crust district of Victorian mansions now falling in the shadow of USC. But residents farther west have appropriated the name for that hard-to-define area between the 10 Freeway and Baldwin Hills. To bolster their case, the area's Neighborhood Empowerment Zone bears that name. The discussion has taken on powerful emotional content in recent years as part of a larger debate over gentrification and changing demographics in that part of the city. We resolved the argument as best we could, using the West Adams label for the region west of Crenshaw Boulevard and including the old mansions east of Vermont Avenue as part of University Park.

The Automobile Club of Southern California delineates no boundaries for the area, but centers it on the West Adams Alternative School, between Seventh and Fourth avenues (west and east) and Adams Boulevard and 25th Street (north and south).

Areas within the West Adams neighborhood include:

Kinney Heights was developed around 1900 by developer Abbott Kinney, for whom it is named. It was a suburban tract of large wealthy Craftsman style houses at what was then the western edge of Los Angeles. The houses featured amenities like "beveled-glass china cabinets, marble fireplaces and mahogany floors". It was accessible to downtown via streetcar and attracted upper-middle-class families.

Many of the hundred-year-old structures are still standing and have been renovated and upgraded. The neighborhood is part of the West Adams Terrace Historic Preservation Overlay Zone (HPOZ).

The Twentieth Street Historic District consists of a row of bungalows and Craftsman-style houses in the 900 block on the south side of 20th Street.

Nearby areas, not necessarily adjacent:

West Adams is home to one of the largest collections of historic houses west of the Mississippi River. The West Adams neighborhood was developed between 1880 and 1925 and contains many diverse architectural styles of the era, including the Queen Anne, Shingle, Gothic Revival, Transitional Arts and Crafts, American Craftsman/Ultimate Bungalow, Craftsman Bungalow, Colonial Revival, Renaissance Revival, Mediterranean Revival, Spanish Colonial Revival, Mission Revival, Egyptian Revival, Beaux-Arts and Neoclassical styles. West Adams boasts the only existing Greene and Greene house left in the entire city of Los Angeles.

Its historic homes are frequently used as locations for movie films and TV shows including CBS's CSI, Six Feet Under, The Shield, Monk, Confessions of a Dangerous Mind, and Of Mice and Men.

All content from Kiddle encyclopedia articles (including the article images and facts) can be freely used under Attribution-ShareAlike license, unless stated otherwise. Cite this article:
West Adams, Los Angeles Facts for Kids. Kiddle Encyclopedia.