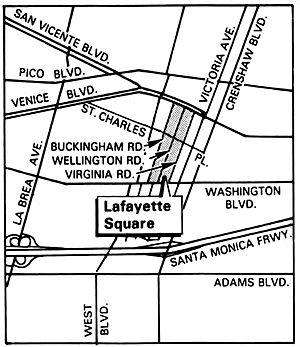 LaFayette Square is a historic semi-gated neighborhood in the central region of Los Angeles, California.

Although founded in 1913 by real estate developer George Lafayette Crenshaw, it is named after the French Marquis de Lafayette, who fought alongside Colonists in the American Revolution. Lying west of Crenshaw Boulevard in the Mid-City area, it was designated by the city as a Los Angeles Historic Preservation Overlay Zone in 2000 for its significant residential architecture and history.

According to the Los Angeles Conservancy, "LaFayette Square was the last and greatest of banker George L. Crenshaw's ten residential developments in the City of Los Angeles." Around the turn of the twentieth century, there was a large oil boom in southern California: Between the extraordinary climate that California had to offer and the rich resources that provided jobs to the oil and agricultural industries, the state experienced great population booms. In Los Angeles, Crenshaw invested in and oversaw the development of ten residential real estate ventures to help satiate the population growth.

LaFayette Square was founded in 1913 and developed during the early 20th century. Wrought-iron gates surrounding the district are a relatively recent addition, coming only in 1989. The addition of the iron gates eliminated cut-through commuter traffic; the only way into the neighborhood is through St. Charles Place.

LaFayette Square is situated about 7 miles (11 km) west of Downtown Los Angeles, 2 miles (3 km) east of Beverly Hills, and 4 miles (6 km) south of Hollywood. The nearest beach is Santa Monica Beach which is about 9 miles away. It consists of eight blocks, centered on St. Charles Place, and situated between Venice Boulevard on the north, Washington Boulevard on the south, Crenshaw Boulevard on the east and West Blvd on the west.

There are 236 homes in the neighborhood. It is immediately south of Victoria Park, southeast of West Los Angeles (Crestview and Picfair Village) and immediately north of Wellington Square.

The central region of Los Angeles experiences warm and dry summers, with average monthly temperatures above 71.6 °F (22.0 °C). According to the Köppen Climate Classification system, this area has a warm-summer Mediterranean climate, abbreviated "Csb" on climate maps. 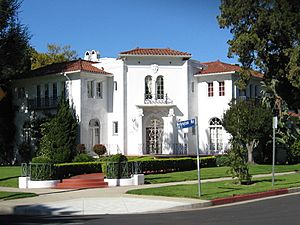 Crenshaw wanted this development to have a European flair so it was designed as an elegant residential park centered on St. Charles Place—a broad palm tree-lined avenue with a landscaped median. The houses in Lafayette Square reflect residential styles popular during the 1910s and 1920s such as Tudor Revival architecture, Italianate, Mediterranean Revival, Neo-Federalist, American Craftsman, Spanish Colonial Revival, and American Colonial Revival. Several houses, such as architect Paul Williams’ own home, were designed in the Modern style, exemplifying an important trend in Los Angeles’ architectural development. 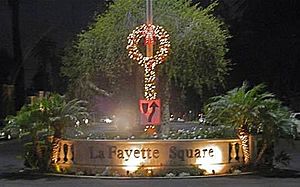 Home ownership shifted "between white-only homeownership during the 1920s through the 1940s to nearly all African American" in the 1950s with court decisions lifting restrictive covenants against black people. The community became more racially mixed "as more white families, priced out of the Westside and Hancock Park" began returning in the early 1990s. 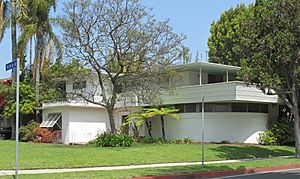 In chronological order by birth year

All content from Kiddle encyclopedia articles (including the article images and facts) can be freely used under Attribution-ShareAlike license, unless stated otherwise. Cite this article:
Lafayette Square, Los Angeles Facts for Kids. Kiddle Encyclopedia.