Arlington Heights is a neighborhood in Central Los Angeles, California.

Arlington Heights is flanked by Koreatown to the north, Harvard Heights to the east, Jefferson Park to the south and Mid-City to the west. The neighborhood is bounded on the north by Olympic Boulevard, on the east by Gramercy Place, on the south by the Santa Monica Freeway and on the west by Crenshaw Boulevard.

Country Club Park is a historic residential area in the northwestern section of Arlington Heights, bounded by Olympic Boulevard, Crenshaw Boulevard, Pico Boulevard, and Western Avenue. It is also a designated Los Angeles Historic Preservation Overlay Zone, with a large number of buildings dating to the earliest phases of Los Angeles’ development westwards in the 1900s to 1930s.

Relation of Arlington Heights to other communities:

The 2000 U.S. census counted 22,096 residents in the 1.03-square-mile neighborhood—an average of 21,423 people per square mile, among the highest population densities in the county. In 2008, the city estimated that the population had increased to 23,330. The median age for residents was 31, about average for both the city and the county.

The median household income in 2008 dollars was $31,421, considered low for both the city and the county. The percentage of households earning $20,000 or less was high, compared to the county at large. The household size of three people was just about average for Los Angeles. Renters occupied 81.6% of the housing units, and home- or apartment owners the rest.

The percentages of never-married men (42.4%) and never-married women (35.9%) were among the county's highest. The census found 1,165 families headed by single parents, the 23.5% rate being considered high for both the city and the county.

The following statistics apply only to the area defined by the Los Angeles Times Mapping L.A. project:

Arlington Heights residents aged 25 and older holding a four-year degree amounted to 13.9% of the population in 2000, about average for both the city and the county, although there was a high percentage of residents with less than a high school diploma. 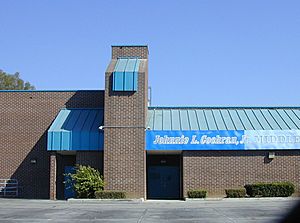 All content from Kiddle encyclopedia articles (including the article images and facts) can be freely used under Attribution-ShareAlike license, unless stated otherwise. Cite this article:
Arlington Heights, Los Angeles Facts for Kids. Kiddle Encyclopedia.