The Menlo Avenue–West Twenty-ninth Street Historic District is a historic district in the North University Park neighborhood of Los Angeles, which is itself part of the city's West Adams district. The area consists of late Victorian and Craftsman-style homes dating back to 1896. The area is bounded by West Adams Boulevard on the north, Ellendale on the east, West Thirtieth Street on the south, and Vermont Avenue to the west. The district is noted for its well-preserved period architecture, reflecting the transition from late Victorian and shingle-styles to the American Craftsman style that took hold in Southern California in the early 1900s. The district was added to the National Register of Historic Places in 1987.

Houses of the district

There are more than 50 historic homes in the Menlo Avenue–West Twenty-ninth Street Historic District, representing a variety of architectural styles from the turn of the 20th Century. A sampling of the architecturally significant homes in the district include the following: 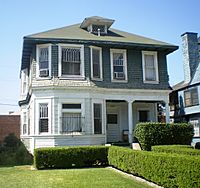 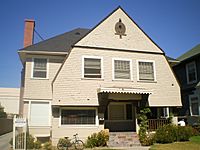 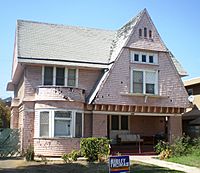 All content from Kiddle encyclopedia articles (including the article images and facts) can be freely used under Attribution-ShareAlike license, unless stated otherwise. Cite this article:
Menlo Avenue–West Twenty-ninth Street Historic District Facts for Kids. Kiddle Encyclopedia.