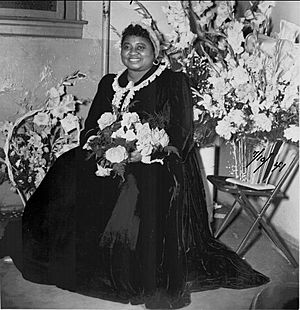 Hattie McDaniel (June 10, 1895 – October 26, 1952) was an American actress and singer. She was born in Wichita, Kansas. She made her movie debut in the 1932 movie, The Golden West. McDaniel is probably best known for her role as Mammy in the 1939 movie, Gone with the Wind where she won a Academy Award for Best Supporting Actress making her the first African-American to win a Academy Award.

McDaniel has two stars on the Hollywood Walk of Fame, one for singing and one for acting. 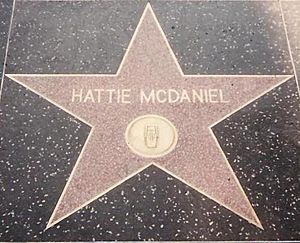 One of McDaniel's stars on the Hollywood Walk of Fame which she received for radio.

All content from Kiddle encyclopedia articles (including the article images and facts) can be freely used under Attribution-ShareAlike license, unless stated otherwise. Cite this article:
Hattie McDaniel Facts for Kids. Kiddle Encyclopedia.