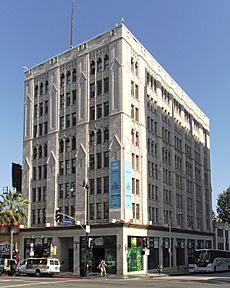 The Hollywood Professional Building housed SAG headquarters in the 1940s

The Screen Actors Guild (SAG) is an American labor union representing over 200,000 film and television principal performers and background performers worldwide. According to SAG's Mission Statement, the Guild was created to negotiate and enforce reasonable salaries, benefits, and working conditions for its performers; collect compensation for exploitation of recorded performances by its members, and provide protection against unauthorized use of those performances; and preserve and expand work opportunities for its members.

The Guild was founded in 1933 in an effort to end exploitation of actors in Hollywood who were being forced into oppressive multi-year contracts with the major movie studios that did not include restrictions on work hours or minimum rest periods, and often had clauses that automatically renewed at the studios' discretion. These contracts were notorious for allowing the studios to dictate the public and private lives of the performers who signed them, and most did not have provisions to allow the performer to end the deal.

Since 1995, the guild has annually awarded the Screen Actors Guild Awards, which are considered an indicator of success at the Academy Awards.

All content from Kiddle encyclopedia articles (including the article images and facts) can be freely used under Attribution-ShareAlike license, unless stated otherwise. Cite this article:
Screen Actors Guild Facts for Kids. Kiddle Encyclopedia.