Orson Scott Card (born August 24, 1951) is a popular American writer, a critic, political writer, and speaker. He is best known for his science fiction books. His novel Ender's Game and its sequel Speaker for the Dead both won the Hugo Award and the Nebula Award, making Card the only writer (as of 2007) to win both of science fiction's top prizes two years in a row. 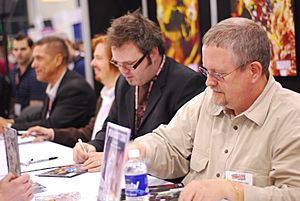 All content from Kiddle encyclopedia articles (including the article images and facts) can be freely used under Attribution-ShareAlike license, unless stated otherwise. Cite this article:
Orson Scott Card Facts for Kids. Kiddle Encyclopedia.