The Prince and the Pauper facts for kids 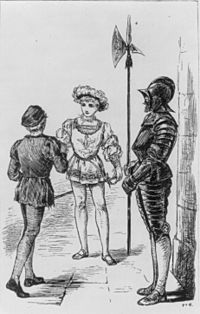 Tom Canty meets Prince Edward. An illustration in The Prince and the Pauper's 1st edition.

The Prince and the Pauper is a book by Mark Twain. It was published in 1882. The story has been adapted to stage, television, and movies.

The story takes place in England, in the year 1547 when the King has a glorious and much rejoiced birth of the son he awaited, Edward the fourth, after many sisters (Mary and Elizabeth)and still births. By chance, Prince Edward, son of King Henry VIII of England and Jane Seymor, and Tom Canty, a pauper (poor boy), find out that they look exactly the same, like identical twins. After they put on each other's clothes for fun, the prince is thrown out of the palace, while people think that Tom is the prince. Now both Edward and Tom have to live in a world where they are treated different and which they do not understand.

Tom lives the life of a prince. On the streets of London, Edward is saved by the nobleman Miles Hendon. Edward travels with Miles around England. There Edward sees and has to live with the poverty and cruel treatment in the life of the poor people.

Then King Henry VIII dies. People prepare to make Tom the next King. At the crowning ceremony, Edward arrives and says that he is the real Prince. In the end, Tom and Edward can clear everything up. Edward becomes King of England. Tom Canty becomes "The King's Ward", a position in which he can live comfortably for the rest of his life. Miles Hendon is made an Earl. King Edward's rule is very good to the common and poor people, because he has lived that way for a while and knows how hard it is. But Edward dies when he is still very young.

All content from Kiddle encyclopedia articles (including the article images and facts) can be freely used under Attribution-ShareAlike license, unless stated otherwise. Cite this article:
The Prince and the Pauper Facts for Kids. Kiddle Encyclopedia.