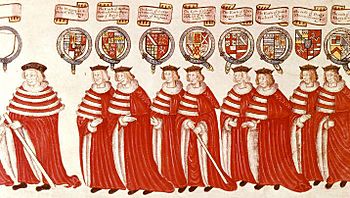 The royal procession to Parliament at Westminster, 4 February 1512. Left to right: The Marquess of Dorset, Earl of Northumberland, Earl of Surrey, Earl of Shrewsbury, Earl of Essex, Earl of Kent, Earl of Derby, Earl of Wiltshire. From: Parliament Procession Roll of 1512.

An Earl (or Jarl) was a title for nobility used by Anglo-Saxons and Scandinavians. It originally meant "chieftain" and it referred especially to chieftains set to rule a territory in a king's stead. In Scandinavia, it stopped being used in the Middle Ages, whereas, in Britain, it became synonymous with the continental count. In Anglo-Saxon times the title was similar to that of Ealdorman.

Today, an earl is a member of the British peerage, and is below a Marquess, but above a Viscount. A British Earl is the same as a continental Count. Since there is no feminine form of Earl, the wife of an Earl has the rank of Countess (the continental equivalent).

All content from Kiddle encyclopedia articles (including the article images and facts) can be freely used under Attribution-ShareAlike license, unless stated otherwise. Cite this article:
Earl Facts for Kids. Kiddle Encyclopedia.