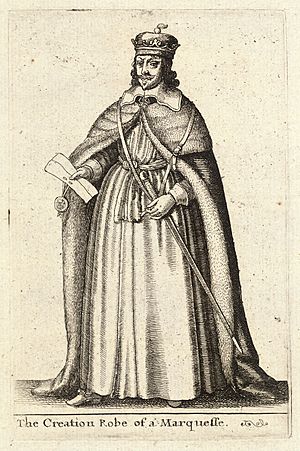 A 17th-century engraving of a marquis in the robe worn during his creation ceremony.

Marquis (or marquess) is a title of nobility in many countries in Europe. It is usually considered to be a rank higher than an earl but lower than a duke.

This title was usually granted by a monarch to reward a subject for either longtime faithful service or the accompishment of some very notable deed or deeds. The title is hereditary, meaning that is passes from a father to his oldest son, or in some countries to all of his sons. Usually if a man holding this title dies without having any male heirs, the title is said to become extinct, meaning that it is no longer held by anyone living.

The female equivalent of this title is often styled marquessa; this title may be held by the wife of a marquis or granted to a woman in her own right.

All content from Kiddle encyclopedia articles (including the article images and facts) can be freely used under Attribution-ShareAlike license, unless stated otherwise. Cite this article:
Marquis Facts for Kids. Kiddle Encyclopedia.