Kenneth Hahn State Recreation Area, or Kenneth Hahn Park, is a state park unit of California in the Baldwin Hills Mountains of Los Angeles. The park is managed by the Los Angeles County Department of Parks and Recreation. As one of the largest urban parks and regional open spaces in the Greater Los Angeles Area, many have called it "L.A.'s Central Park". The 401-acre (162 ha) park was established in 1984.

The Baldwin Hills were part of the homeland of the Tongva people, inhabited by them for over 8,000 years. In the 19th century the area was part of the Spanish and Mexican Ranchos of California era, with the Rancho Rincon de los Bueyes and Rancho La Cienega o Paso de la Tijera in and around the present day park. As Los Angeles quickly grew during the 20th century, only the rugged terrain of this section of the Baldwin Hills protected it from being developed.

In 1932 the area east of the park was used as the site of the first Olympic Village ever built, for the 1932 Summer Olympics in the 10th Olympiad, which Los Angeles hosted. To serve as a continual reminder of the events, 140 trees have been planted together on the hills where the 1932 Olympics took place, with each tree representing a nation that took part in the 1984 Olympics.

Between 1947 and 1951 the Baldwin Hills Reservoir was built in the hills here. In 1963 the reservoir's dam collapsed disastrously, washing away residences in the canyon and flooding the landmark Baldwin Hills Village (now Village Green). The news coverage of the disaster was the first time aerial footage was televised live. The empty bowl of the reservoir is still visible.

In the late 1940s the city transportation master plan included building a new north-south freeway, the aborted Laurel Canyon Freeway-SR-170, that would have bisected the Baldwin Hills and park site where La Cienega Boulevard currently crosses the hills.

In 1977 Los Angeles County Supervisor Kenneth Hahn convinced Vice President Walter Mondale to reuse the land, from former oil-drilling sites, for a public open space park. At the time the area was also a very popular spot for the then new sport of motocross, locals calling it 'Motorcycle Hill'. Land was acquired for the park, and includes the Ballona Creek watershed that is a wildlife corridor from the hills through Culver City to the Ballona Wetlands.

The park is named after Los Angeles County Board of Supervisors member Kenneth Hahn, also the father of James Hahn, former Los Angeles mayor, and Janice Hahn, former Los Angeles City Council member and later a U.S. Member of Congress. The Kenneth Hahn State Recreation Area first opened in 1983 as the Baldwin Hills State Recreational Area, and was later renamed in 1988 to honor Supervisor Hahn and his preservation efforts there. Also since its opening the park has been expanded, as some of the adjacent oil wells have 'dried up' and the oil field land cleaned up and acquired. 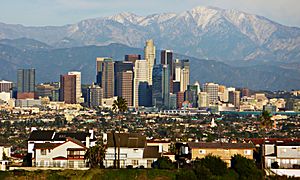 Hahn Park offers walking and hiking trails with some of the area's best scenic vistas:

The park is a destination for picnics and family gatherings, having 100 picnic tables in various picnic grounds around the park. The park also has four playgrounds, a half basketball court, a multi-purpose field, and a sand volleyball court. Garden areas include a Japanese garden with a stream and waterfall. In 2017, a 9-hole disc golf course was added along the north bowl.

There is a lake for fishing, stocked monthly with trout or catfish, depending on the weather season.

Since 2004, the park, primarily the bowl, has been the site of the Southern California USATF Cross Country Championships.

The park's native habitat is the Coastal sage scrub plant community, with oak woodlands in northern arroyos and bunch grass grasslands on the southwestern windy and exposed terrain. 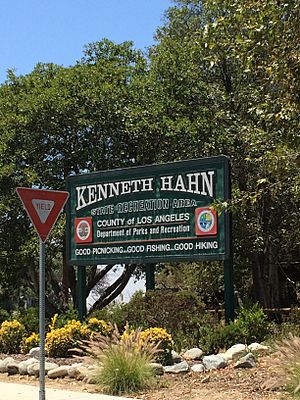 All content from Kiddle encyclopedia articles (including the article images and facts) can be freely used under Attribution-ShareAlike license, unless stated otherwise. Cite this article:
Kenneth Hahn State Recreation Area Facts for Kids. Kiddle Encyclopedia.