Say's phoebe (Sayornis saya) is a passerine bird in the tyrant flycatcher family. A common bird in the western United States, it prefers dry, desolate areas. This bird was named for Thomas Say, the American naturalist.

Say's phoebe was formally described in 1825 by the French naturalist Charles Lucien Bonaparte from a specimen collected near Pueblo, Colorado. He coined the binomial name Muscicapa saya where the specific epithet was chosen to honour the naturalist Thomas Say. The species is now placed in the genus Sayornis that was introduced by Bonaparte in 1854.

The adult Say's phoebe is a barrel-chested bird with a squared-off head. It is gray-brown above with a black tail and buffy cinnamon below, becoming more orange around the vent. The tail is long and the primaries end just past the rump on resting birds. The wings seem pale in flight and resemble a female mountain bluebird. The juvenile is similar to adult, but has buffy orange to whitish wingbars and a yellow gape. Adult birds are 7.5 in (19 cm) long. They have a 13 in (33 cm) wingspan and they weigh 0.75 oz (21 g).

These birds prefer dry, desolate, arid landscapes. They can be found on farmland, savanna and open woodlands, usually near water. They tend to be early migrants to the western U.S. 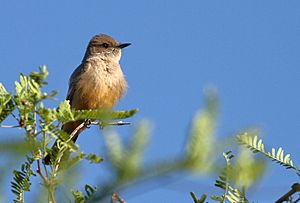 This bird is similar to the eastern phoebe. It sallies from a perch to catch insects in mid-air. It also hovers American kestrel-like and dips its tail while perched. The Say's phoebe also likes to feed just above the water's surface. They eat insects almost exclusively, but have been known to eat berries.

Say's phoebes nest in the typical phoebe fashion. They attach their nests under bridges, canyon walls, wells and abandoned mine shafts. The nest is made by the female and is cup-shaped. It is made of grass, forbs, moss and plant fibers lined with hair and other fine materials. She lays three to seven, but usually four or five, white, mostly unmarked, eggs. Some have red spots. The eggs are roughly 0.8 in (20 mm).

All content from Kiddle encyclopedia articles (including the article images and facts) can be freely used under Attribution-ShareAlike license, unless stated otherwise. Cite this article:
Say's phoebe Facts for Kids. Kiddle Encyclopedia.