The headwaters of the urban river known as Ballona Creek are in the Santa Monica Mountains, such as above Beverly Hills and flows along the north base of Baldwin Hills through an active geological watergap, on the way to the Pacific Ocean in Santa Monica Bay. La Cienega Boulevard goes through a pass in the ridge of the Baldwin Hills between Inglewood and Culver City, and northeast of Los Angeles International Airport. La Cienega Boulevard is a parkway road passing alongside open space of large private corporate lands with oil wells of the Inglewood Oil Field in the southern Baldwin Hills. 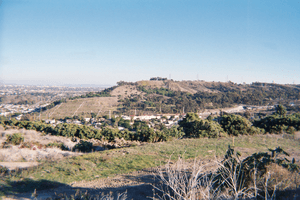 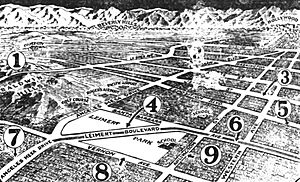 1927 Los Angeles Times map shows (1) the proposed extension of a 100-foot-wide La Brea Avenue between Jefferson Street through the Baldwin Hills toward Inglewood.

All content from Kiddle encyclopedia articles (including the article images and facts) can be freely used under Attribution-ShareAlike license, unless stated otherwise. Cite this article:
Baldwin Hills (mountain range) Facts for Kids. Kiddle Encyclopedia.