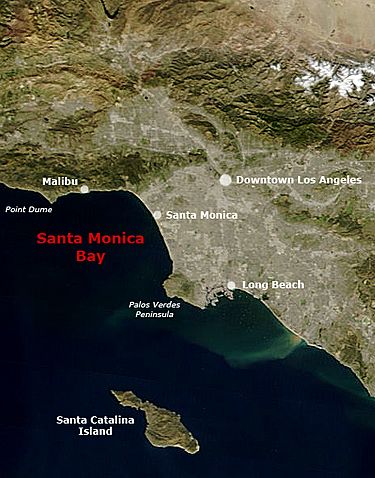 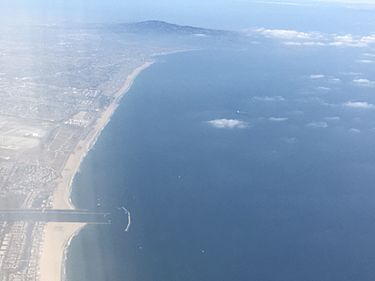 Santa Monica Bay is a bight of the Pacific Ocean in Southern California, United States. Its boundaries are slightly ambiguous, but it is generally considered to be the part of the Pacific within an imaginary line drawn between Point Dume, in Malibu, and the Palos Verdes Peninsula. Its eastern shore forms the western boundary of the Los Angeles Westside and South Bay regions. Although it was fed by the Los Angeles River prior to the river's catastrophic change of course in 1825, the only stream of any size now flowing into it is Ballona Creek. Other waterways draining into the bay include Malibu Creek, Topanga Creek, and Santa Monica Creek.

In the 1930s, gambling ships anchored beyond the regulated three mile limit, then kept measured from the beach. The ships were popular, and a fleet of ever-larger ships and barges appeared until the State Attorney General recalculated the limit to exclude the bay. The largest ship held the state police off for nine days with submachine guns in what the newspapers called, The Battle of Santa Monica Bay.

Once a major commercial fishery, Santa Monica Bay's water quality declined drastically in the 20th century as development of Los Angeles County resulted in large amounts of sewage and trash-rich storm runoff being dumped into its waters. Through restoration projects mandated by the Clean Water Act and advocated by groups such as Heal the Bay and the Surfrider Foundation, the bay's water quality has improved fairly dramatically from its early-1980s nadir. Hyperion sewage treatment plant's output is now far cleaner than before. However, during the region's rainy winters, the bay suffers from algal bloom and other water pollution-related maladies, forcing the closure of most of the famous beaches along its shore during that time.

In 1990, actor Wallace Reid Jr. was killed in a plane crash due to heavy fog.

All content from Kiddle encyclopedia articles (including the article images and facts) can be freely used under Attribution-ShareAlike license, unless stated otherwise. Cite this article:
Santa Monica Bay Facts for Kids. Kiddle Encyclopedia.