The history of Rancho Palos Verdes dates back to the Tongva or Gabrielino Indians, who inhabited the site before the Age of Discovery. Portuguese explorer Juan Rodriguez Cabrillo was credited as the first European to navigate the California Coast in 1542, which included the hills of Rancho Palos Verdes. Rancho de los Palos Verdes was established by a Mexican land grant given in 1846 by Governor Pio Pico to Jose Loreto and Juan Capistrano Sepulveda.

The city's most notable geographic features are the Palos Verdes Hills and cliffs, with grand vistas of the Pacific Ocean and of Santa Catalina Island. The city incorporated on September 7, 1973. The population was 41,643 at the 2010 census. 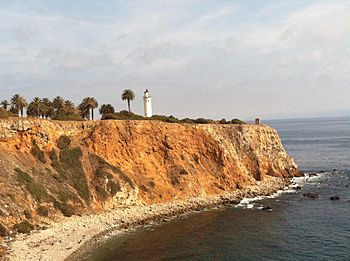 The Point Vicente Interpretive Center is a premier whale-watching site provides spectacular opportunities to view the annual migration of the Pacific gray whale from December through April. The center opened in 1984 with a mission to present and interpret the unique features and history of the Palos Verdes Peninsula. The almost 10,000-square-foot (930 m2) expanded Interpretive Center, reopened on July 15, 2006, features exhibits on the natural and cultural history of the peninsula, with a special emphasis on the Pacific gray whale. The Point Vicente Lighthouse, built in 1926, is adjacent to the center and is on the National Register of Historic Places. At another location along the coast, Wayfarers Chapel, designed by Lloyd Wright and built between 1949 and 1951, is also on the National Register of Historic Places.

The Portuguese Bend landslide, one of the largest continuously moving landslides in North America, is located along the southern coastal area. Together with the Palos Verdes Peninsula Land Conservancy in 2009, the city completed the acquisition of a total of two square miles of open space, the Palos Verdes Nature Preserve, the largest preserve of coastal open space north of San Diego and south of Santa Barbara. The site of the former Marineland of the Pacific (1954–87) was redeveloped and is now occupied by the Terranea Resort, which opened in June 2009. The city is also home to Trump National Golf Course, one of eleven in the Trump portfolio of courses. The Salvation Army's School for Officer Training is located in Rancho Palos Verdes.

As with other cities on the Palos Verdes Peninsula, the city has had to find ways to control the population of wild peafowl. Frank A. Vanderlip spearheaded a group that bought 16,000 acres (6,500 ha) and began development of the peninsula. He is credited with introducing the birds here around 1910.

According to the United States Census Bureau, the city has a total area of 13.5 square miles (35 km2), virtually all of which is land.

According to the 2010 United States Census, Rancho Palos Verdes had a median household income of $118,893, with 4.5% of the population living below the federal poverty line.

All content from Kiddle encyclopedia articles (including the article images and facts) can be freely used under Attribution-ShareAlike license, unless stated otherwise. Cite this article:
Rancho Palos Verdes, California Facts for Kids. Kiddle Encyclopedia.