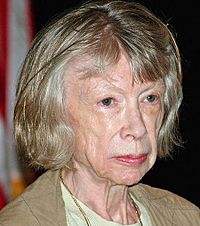 Joan Didion ( born December 5, 1934) is an American writer. She was born in Sacramento, California. In the 1960s, she released a collection of essays titled Slouching Towards Bethlehem (1968). In 1970, she released Play It as It Lays.

In 1991, she wrote the earliest mainstream media article to suggest the Central Park Five had been wrongfully convicted.

In 2017, a Netflix documentary about her career, The Center Will Not Hold, was released.

All content from Kiddle encyclopedia articles (including the article images and facts) can be freely used under Attribution-ShareAlike license, unless stated otherwise. Cite this article:
Joan Didion Facts for Kids. Kiddle Encyclopedia.