Doctor of Letters facts for kids 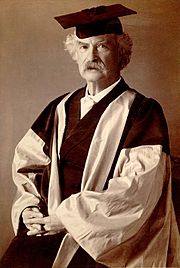 Samuel Clemens (Mark Twain), wearing the full-dress gown of an Oxford DLitt. He was awarded an honorary doctorate in letters in 1907

Doctor of Letters (Latin: Litterarum doctor; D.Litt.; Litt.D.; D. Lit.; or Lit. D.) is an academic degree. It is a higher doctorate which, in some countries, may be considered to be beyond the Ph.D. and equal to the Doctor of Science (Sc.D. or D.Sc.). It is awarded in many countries by universities and learned bodies. It is given in recognition of achievement in the humanities, original contribution to the creative arts or scholarship and other merits. Cambridge University requires a candidate to "give proof of distinction by some original contribution to the advancement of science or of learning." When awarded without an application by the conferee, it is awarded as an honorary degree. A Doctor of Letters is a commonly awarded honorary degree.

All content from Kiddle encyclopedia articles (including the article images and facts) can be freely used under Attribution-ShareAlike license, unless stated otherwise. Cite this article:
Doctor of Letters Facts for Kids. Kiddle Encyclopedia.