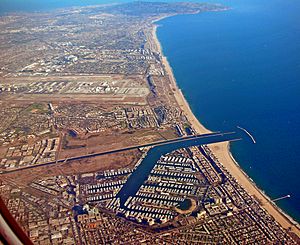 Marina del Rey (Spanish for "Docks of the King") is an unincorporated seaside community in Los Angeles County, California, with an eponymous harbor that is a major boating and water recreation destination of the greater Los Angeles area. The port is North America's largest man-made small-craft harbor and is home to approximately 5,000 boats. The area is a popular tourism destination for both land and water activities such as paddle board and kayak rentals, dining cruises, and yacht charters. Land activities include bicycling on several bicycle paths, walking paths along the waterfront, and birdwatching (birding). Wildlife watching opportunities include California sea lions and harbor seals. Dolphins and whales occasionally visit the deeper waters of harbor. This Westside locale is approximately 4 miles (6.4 km) south of Santa Monica, 4 miles (6.4 km) north of Los Angeles International Airport, and 12.5 miles (20.1 km) west-southwest of Downtown Los Angeles.

The harbor is owned by Los Angeles County and managed by the Department of Beaches and Harbors (DBH), but the waters are environmentally regulated by state government and federal government through their many agencies and departments with overlapping oversight. The Los Angeles Times said in a 1997 editorial that the harbor is "perhaps the county's most valuable resource". The population was 11,373 at the 2020 census. For statistical purposes, the United States Census Bureau has defined Marina del Rey as a census-designated place (CDP). The census definition of the area may not precisely correspond to local understanding of the area with the same name; for example, the 90292 ZIP code includes all of Marina del Rey and portions of neighboring Los Angeles, such as Del Rey, and has a population of 21,576, more than double that of the CDP. Many residents of the 90292 ZIP code consider themselves to live in Marina del Rey even if they in fact live outside the official boundaries of the CDP.

Prior to its development as a small craft harbor, the land occupied by Marina del Rey was a salt-marsh fed by fresh water from Ballona Creek, frequented by duck hunters and few others. Burton W. Chace, a member of the Los Angeles County Board of Supervisors, referred to the area as mud flats, though today the area would more properly be referred to as wetlands.

In the mid-19th century, Moye C. Wicks and Louis Mesmer thought of turning this Playa del Rey estuary into a commercial port. He formed the Ballona Development Company in 1888 to develop the area, but three years later the company went bankrupt.

Port Ballona made by Louis Mesmer and Moye Wicks was then sold to Moses Sherman. Sherman purchased 1,000 acres (400 ha) of land around the Ballona lagoon and Port Ballona in 1902 under the name the Beach Land Company. Sherman and Clark renamed the land "Del Rey". Port Ballona was then renamed Playa Del Rey. The port was serviced by the California Central Railway opened in September 1887, this line later became the Santa Fe Railway, that later became the Atchison, Topeka, and Santa Fe Railroad. The rail line ran from the port to Redondo junction. A street car tram line was made to the Port by the Redondo and Hermosa Beach Railroad company, that had incorporated on February 21, 1901. This company was part of the Los Angeles Pacific Railroad owned by Sherman. The tram line opened December 1902 departed downtown at 4th & Broadway.

In 1916, the U.S. Army Corps of Engineers revisited the idea of a commercial harbor, but declared it economically impractical. In 1936 the U.S. Congress ordered a re-evaluation of that determination, and the Army Corps of Engineers returned with a more favorable determination; however, the Marina del Rey harbor concept lost out to San Pedro as a commercial harbor and development funding went to the Port of Los Angeles instead. 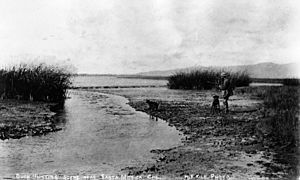 Duck hunting on the Ballona lowlands in what would become Marina del Rey, 1890.

In 1953, the Los Angeles County Board of Supervisors authorized a $2 million loan to fund construction of the marina. Since the loan only covered about half the cost, the U.S. Congress passed and President Dwight D. Eisenhower signed Public Law 780 making construction possible. Ground breaking began shortly after.

With construction almost complete, the marina was put in danger in 1962–1963 due to a winter storm. The storm caused millions of dollars in damage to both the marina and the few small boats anchored there. A plan was put into effect to build a breakwater at the mouth of the marina, and the L.A. County Board of Supervisors appropriated $2.1 million to build it. On April 10, 1965 Marina del Rey was formally dedicated. The total cost of the marina was $36.25 million for land, construction, and initial operation.

It is bounded on all sides by the City of Los Angeles. The beach-style homes, the strip of land against the beach, and the beach itself (see photo), west of the harbor, are within the City of Los Angeles limits, but share the same zip code as Marina del Rey. The name of this strip is the Marina Peninsula. Via Dolce and the southern portion of Via Marina are the boundaries between L.A. City and the unincorporated area.

The marina itself, a specially designed harbor with moorings for pleasure craft and small boats, is surrounded by high-rise condos, hotels, apartments, shops, and restaurants. The area also includes the University of Southern California Information Sciences Institute and the UCLA Marina Aquatic Center.

The community is served by the three-mile-long (5 km) Marina Freeway (State Route 90), which links Marina del Rey directly to Interstate 405 and nearby Culver City.

According to the 2010 United States Census, Marina del Rey had a median household income of $95,248, with 9.9% of the population living below the federal poverty line.

There were 5,315 households out of which 6.7% had children under the age of 18 living with them, 22.7% were married couples living together, 3.6% had a female householder with no husband present, and 71.4% were non-families. Of all households, 57.3% were made up of individuals and 6.8% had someone living alone who was 65 years of age or older. The average household size was 1.54 and the average family size was 2.31.

Panoramic view of the marina from a nearby office building

The Marina Expressway, California State Route 90, terminates at Lincoln Boulevard (California State Route 1) in northeastern Marina del Rey and links the area with Culver City. A water shuttle service, the WaterBus, operates on select days during the summer months. Shuttle services operate on the roads within the marina and between the nearby sites of Playa Vista, and the Venice Pier.

Washington Boulevard bounds the Marina to the northwest, the Pacific Ocean to the southwest, Ballona Creek to the southeast, and Lincoln Boulevard to the northeast. Within those boundaries, Marina del Rey separates into two distinct regions, the harbor area and the suburban area.

The harbor area has eight basins separated by six strips of land, each of which has at least one street on it. From the northeastern end of the Marina, going clockwise, these streets are: Bali Way, Mindanao Way (with west terminus at Burton Chace Park), Fiji Way (bordering the southeastern edge of the Marina), Bora Bora Way, Tahiti Way, Marquesas Way, Panay Way, and Palawan Way. Panay Way, Marquesas Way, Tahiti Way, and Bora Bora Way are all on the western side of the Marina and all terminate at Via Marina, which in turn terminates at Washington Boulevard. Palawan Way is also on the west side, but it terminates directly to Washington Boulevard east of Via Marina. On the east side, Bali Way ends at Lincoln Boulevard, Fiji Way ends at the Marina Freeway and Mindanao Way turns into Short Avenue in Los Angeles after crossing Alla Road. Admiralty Way lies north of the harbor and forms an arc that intersects the roads that lead to either Washington Boulevard or Lincoln Boulevard.

The suburban area bounded by Admiralty Way to the south, Washington Boulevard to the west and Lincoln Boulevard to the east consists mostly of homes and apartments and is referred to by the real estate industry as the Golden Triangle.

All content from Kiddle encyclopedia articles (including the article images and facts) can be freely used under Attribution-ShareAlike license, unless stated otherwise. Cite this article:
Marina del Rey, California Facts for Kids. Kiddle Encyclopedia.