Kids Encyclopedia Facts
This page is about the neighborhood in the City of Los Angeles. For the census-designated place in Fresno County, see Del Rey, California.

Del Rey (Spanish for "of the King") is a neighborhood in the Westside of Los Angeles, surrounded on three sides by Culver City, California. Within it lie a police station, the largest public housing complex on the Westside, a public middle school and six public elementary schools. It is served by a neighborhood council and a residents association. Del Rey, with a 32,000+ population, has a large number of military veterans. 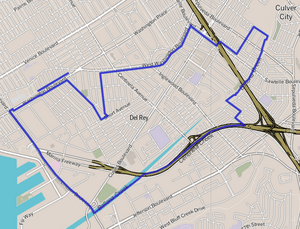 Del Rey boundaries as drawn by the Los Angeles Times

According to the Neighborhood Council Area Map, Del Rey is organized in eight (8) areas ranging from Area A through H and surrounded on the northwest, north, northeast and east by Culver City, on the southeast by Playa Vista, on the southwest and west by Marina del Rey and on the northwest by Venice. Its southern apex touches the northeast corner of Playa del Rey.

Street and other boundaries are: the Culver City line on the northwest, north, east and southeast, Ballona Creek on the southeast and Lincoln Boulevard on the southwest. The western apex of Del Rey is at the corner of Lincoln and Washington boulevards.

Relation of Del Rey to nearby places, not necessarily contiguous:

The 2000 U.S. census counted 28,010 residents in the 2.45-square-mile Del Rey neighborhood—an average of 11,420 people per square mile, about the norm for Los Angeles; in 2008, the city estimated that the population had increased to 32,976. The median age for residents was 35, considered the average for Los Angeles; the percentage of residents aged 19 through 34 was among the county's highest.

The median yearly household income in 2008 dollars was $62,259, an average figure for Los Angeles. The average household size of 2.5 people was about the same as the city as a whole. Renters occupied 55.2% of the housing stock and house- or apartment owners held 44.8%.

Gerard Majella Catholic Church is host to a charter school and a preschool.

Thirty percent of Del Rey residents aged 25 and older had earned a four-year degree by 2000, an average figure for both the city and the county.

The schools within Del Rey are as follows:

All content from Kiddle encyclopedia articles (including the article images and facts) can be freely used under Attribution-ShareAlike license, unless stated otherwise. Cite this article:
Del Rey, Los Angeles Facts for Kids. Kiddle Encyclopedia.