Kids Encyclopedia Facts
Not to be confused with the following cities in California: Palm Desert, Palm Springs, Thousand Palms, and Twentynine Palms.

Palms (originally "The Palms") is a highly diverse, densely populated community in the Westside region of Los Angeles, California, founded in 1886 and the oldest neighborhood annexed to the city, in 1915. The 1886 tract was marketed as an agricultural and vacation community. Today it is a primarily residential area, with a large number of apartment buildings, ribbons of commercial zoning and a single-family residential area in its northwest corner.

In Spanish and Mexican days, the area that later became Palms was a part of the Rancho La Ballona, where in 1819 Agustín and Ygnacio Machado, along with Felipe Talamantes and his son, Tomás, acquired grazing rights to 14,000 acres (57 km2) of land. It was thenceforth used as grazing land for cattle and sheep.

According to Culver City History, a 2001 work by Julie Lugo Cerra, published for the Culver City Unified School District:

The family lore relates that Agustín was chosen, by virtue of his skill as a horseman to ride his fastest steed, from dawn until dusk, beginning at the foot of the Playa del Rey hills to claim Rancho La Ballona, or Paso de las Carretas. It stretched to Pico Boulevard (abutting Rancho San Vicente y Santa Monica) and to what we know as Ince Boulevard, where Rancho Rincón de los Bueyes began.

Agustin Machado died in 1865, the same year La Ballona School was constructed to serve all elementary-age children within the Ballona School District. In 1871, Ygnacio Saenz established a general store at the crossing which later became Washington Boulevard and Overland Avenue. (Three corners of that intersection are in Culver City and one is in Palms.) The store, which was also a way stop on the county road between Los Angeles and the ocean, also housed the area's first post office.

By 1882, the county's electoral district serving Palms was known as Ballona, with voting at La Ballona School.

"The Southern Pacific completed its Los Angeles route in 1883, and only three years later the Santa Fe finished its Los Angeles spur. With a huge investment in their new coast-to-coast rail lines and large Los Angeles land holdings, the railroads set forth a long-term plan for growth. Southern California citrus farming was born. Tourism and the building of towns were promoted to attract investors, to raise land values, and to increase the value of railroad shipments."

La Ballona Valley was part of that land rush. In 1882, several Midwestern families chartered a reconditioned freight car and left their homes in Le Mars, Iowa, to settle in the valley. They held their first Sunday school in the old La Ballona School on Washington Boulevard, and in fall 1883 they organized a United Brethren Church with 11 members.

About that time the valley drew the attention of three speculators – Joseph Curtis, Edward H. Sweetser and C.J. Harrison. They paid $40,000 for 500 acres (2.0 km2). They surveyed their land and cut it up, and then they sold it to the new arrivals. They planted 5,000 trees along eight miles (13 km) of graded streets. They named it The Palms, even though they had to bring in palm trees and plant them near the train station. Their first tract map was dated December 26, 1886, which is now considered the birth date of Palms. 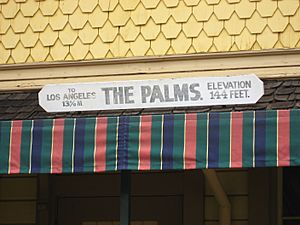 The subdividers gave the United Brethren Church two lots and $200 in cash to get started. In 1887 the church building was completed, and in 1889 the parsonage was built. In 1908 the old chapel was moved to the rear of the lot and new sanctuary built. In 1916 the old parsonage sold and a new one built. Later a bungalow was added next door to be a Sunday school.

Although its exact location has been lost, contemporary sources indicate the existence of a Palms Villa, Palm Villa, or Villa Hotel at least from no later than 1890 through 1904. It may have stood on Tabor Street, which was known as Villa Avenue at the time.

Map from the Los Angeles Times shows area that approved annexation on June 1, 1914. The white areas marked by dotted lines (including Culver City) voted against annexation in May and were excluded from the June vote.

The residential development of a vast area west of the Los Angeles city limits brought a pressure for annexation to the city. Particularly noted was, first, the construction by L.A. of a new outfall sewer that could serve the area and, second, plans by the city engineer for a flood control project for the La Cienega region. Agitation for annexation was begun by Palms residents, but the reach was extended all the way west to the then-separate city of Sawtelle limits so that municipality could be annexed later.

There were two annexation elections. Both were hard fought. The first, on April 28, 1914, was voted down, according to the Los Angeles Times, "because the people in the suburban territory are afraid of the municipal bond craze, of which the power scheme is the last straw, and the threatened burden of extra high taxation." The vote was 387 in favor and 264 against; a two-thirds vote was needed, so the "yes" vote was shy by 47.

A new petition was almost immediately submitted, leaving out all the areas that had voted against annexation. Nevertheless, Harry Culver, the founder of Culver City, denounced the new plan as a gerrymander and opposed it. But The Times wrote:

"This district comprises some of the richest country between the city and the sea and is directly in the path of the residence expansion westward. Because its growth is inevitable and its population certain to be greatly increased soon, advocates of annexation believe the necessity for securing adequate and permanent water rights is urgent and are working diligently to secure the required two-thirds vote."

The Travelers' Handbook to Southern California, published in 1904, stated that "The Palms" was "named from the number of large palms which dot the region for quite a distance near the Southern Pacific depot" and that "The Los Angeles and Pacific road has [been] built via The Palms and Ocean Park to Santa Monica, making its line a belt of sixteen miles or more on each lap."

Over the decades following the turn of the 20th century, the definite article was dropped from the place name. By the 1920s, the name was simply "Palms" on local transit maps.

Palms has no official boundaries, but the "Mapping L.A." reference guide of the Los Angeles Times measures it at 1.95 square miles and places it northwest of Culver City, south of Cheviot Hills and Beverlywood, southeast of Rancho Park, west of Mid-City and northeast of Mar Vista. The 1886 subdivision map filed with Los Angeles County showed Palms as bounded on the northeast by what would today be Manning Avenue. 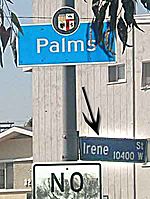 Irene Street, within Palms, has been placed by the city inside the Westside Neighborhood Council to the north.

(It should be noted that this area includes the 10400 block of Irene Street, which has been placed by the city within the bounds of the Westside Neighborhood Council to the north.)

When Palms was annexed to the city of Los Angeles in 1915, the bounds extended westward from Arlington Avenue on the southeast and about Rimpau Boulevard and Wilshire Boulevard on the northeast to Pico and Exposition Boulevards on the northwest. West of Overland Avenue wasn’t annexed until 1927.

The Palms Neighborhood Council boundaries were defined by the city to omit Westside Village (which had already been claimed by the Mar Vista Community Council) and the area north and east of National Boulevard, which went to the Westside Neighborhood Council. Petitions were passed in both districts for boundary adjustments.

Relation of Palms to nearby places, not necessarily contiguous:

Almost half the residents (45.9%) had a four-year degree, which was a high figure compared to the city as a whole. The percentage of residents aged 19 to 34 was among the county's highest.

Palms is served by the Metro Expo Line, reactivating passenger service which had been in place from 1875 to 1953. Service restarted in 2012, with the western terminus located near the intersection of Venice and Robertson Boulevards. The line now travels through Palms once again on its way to Santa Monica, with the station at the intersection of National, Palms and Exposition Boulevards which opened on May 20, 2016.

Palms' diversity is reflected in its landmarks. Religious sites include the complexes of the International Society for Krishna Consciousness on Watseka Avenue and the Iranian-American Muslim Association of North America (IMAN) on Motor Avenue.

Palms has a large number of Indian and Pakistani restaurants and businesses. In addition, it is also one of the centers of the Brazilian community in Los Angeles, with a number of Brazilian-oriented restaurants and shops, and one nightclub.

The area is host to an unusual museum, the Museum of Jurassic Technology, and a research institute, the Center for Land Use Interpretation. It has a legitimate theater, the Ivy Substation, which is now home to the Actors Gang, led by Tim Robbins. The Ivy Substation is within Media Park, which has been leased to Culver City on a long-term basis.

Palms Park and Palms Recreation Center are in Palms. The recreation center has an auditorium, barbecue pits, lighted outdoor basketball courts, a children's play room, a community room, and picnic tables. The Palms Park Child Care Center is adjacent to the park. Preschool is offered for children ages 3–5. The center has an enclosed play area. Woodbine Park is also located in Palms. It is a small pocket park with picnic tables, a basketball court, and a children's play area. It is this park where rapper Snoop Doggy Dogg (now known as Snoop Dogg or Snoop Lion) was alleged to have been involved in the shooting death of gang member Philip Woldemariam.

All content from Kiddle encyclopedia articles (including the article images and facts) can be freely used under Attribution-ShareAlike license, unless stated otherwise. Cite this article:
Palms, Los Angeles Facts for Kids. Kiddle Encyclopedia.