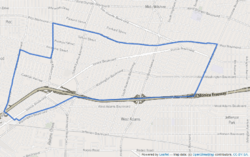 Map of Mid-City as delineated by the Los Angeles Times

Mid-City is a highly diverse, very dense urban neighborhood in Central Los Angeles, California, with renters occupying most of the housing space but also with notable districts composed of historic single-family homes.

Attractions include restaurants and a post office named for singer Ray Charles, who had his recording studio in Mid-City. The neighborhood hosts eleven public and private schools. A north-south light-rail line is proposed for the area.

Mid-City is flanked by Carthay and Mid-Wilshire to the north, Arlington Heights to the east, Culver City and West Adams to the south, Palms to the southwest, Beverlywood to the west and Pico-Robertson to the northwest. The neighborhood is bounded on the north by Pico Boulevard, on the east by Crenshaw Boulevard, on the south by the Santa Monica Freeway, on the southwest by Washington and National boulevards, on the west by Robertson Boulevard and on the northwest by Cadillac Avenue and La Cienega Boulevard. 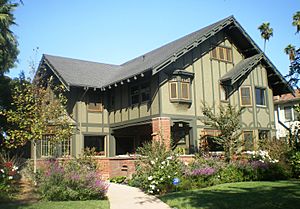 The Holmes-Shannon House in Victoria Park was built in 1911. 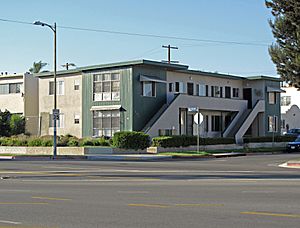 The 2000 U.S. census counted 52,197 residents in the 3.47-square-mile neighborhood—an average of 15,051 people per square mile, among the highest population densities in Los Angeles County. In 2008, the city estimated that the population had increased to 55,016. The median age for residents was 31, about average for both the city and the county.

The median household income in 2008 dollars was $43,711, considered average for the city. The percentage of households earning $20,000 or less was high, compared to the county at large. The average household size of 2.8 people was just about average for Los Angeles. Renters occupied 68.9% of the housing units, and home- or apartment owners the rest.

The percentages of never-married men (43.2%) and never-married women (35%) were among the county's highest. The census found 2,748 families headed by single parents, the 23.4% rate being considered high for both the city and the county.

According to locals, the subdivision was named after a family whose home stood on what it now the city-maintained Reynier Park. The village is often referred to as being part of the South Robertson area but locals wanted to make a distinction between the two and formed their own neighborhood association. Rocha House, the 13th Los Angeles Historic-Cultural Monument, is located in the village. 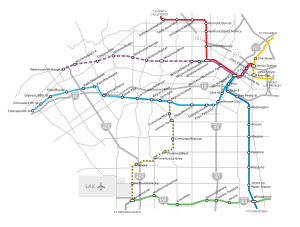 As part of their long-range plans, the Los Angeles County MTA has proposed the Metro Crenshaw Line, which would place a rail transit stop in Mid-City. The proposed rail stop is at the intersection of Pico and San Vicente Boulevards—site of the old Vineyard Junction. That same intersection was a former rail stop of the Pacific Electric Red Car lines more than 50 years ago.

The Pacific Electric Red Car lines heading west from downtown Los Angeles diverged at Vineyard Junction. One line continued on to Beverly Hills, while the other went out to Venice Beach. The old Vineyard Junction site is now occupied by the end terminal for the Santa Monica Big Blue Bus.

The Crenshaw Light Rail Line would allow Mid-City residents to easy access to the city's east/west rail lines: the Purple Line along Wilshire Boulevard, the Expo Line from Downtown Los Angeles to Culver City, and the Green Line from Norwalk to Redondo Beach.

Currently, the Mid-City alignment is unfunded, and part of the Crenshaw Corridor's "Northern Feasibility Study". 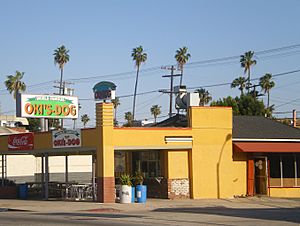 All content from Kiddle encyclopedia articles (including the article images and facts) can be freely used under Attribution-ShareAlike license, unless stated otherwise. Cite this article:
Mid-City, Los Angeles Facts for Kids. Kiddle Encyclopedia.