Beverlywood is a neighborhood in the Westside of the city of Los Angeles, California. There are three schools within the area. 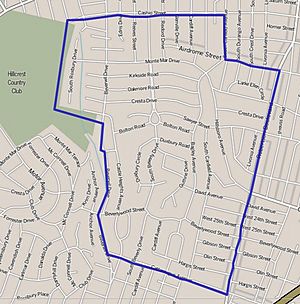 Beverlywood as delineated by the Los Angeles Times

According to the Mapping L.A. project of the Los Angeles Times, Beverlywood is flanked on the north by Pico-Robertson, on the east by Mid-City, on the south by Palms and on the west by Cheviot Hills. Beverlywood's street and other borders are given as: north, Cashio Street and Airdrome Street; east. Canfield Avenue and Robertson Boulevard; south, Cattaraugus Avenue; and west, Beverwil Drive and the boundary with the Hillcrest Country Club.

The borders of the Beverlywood Home Owners Association are as follows: Monte Mar Drive to the north, Hillcrest Country Club and Anchor Avenue to the west, Beverlywood Street to the south, and Robertson Boulevard to the east. These borders are marked by entrance monuments and signs.

The neighborhood's HOA owns and maintains several private parks in the neighborhood, including Circle Park, which are gated and only accessibly to Beverlywood residents.

Beverlywood was developed in 1940 by Walter H. Leimert, who also developed Leimert Park. The neighborhood consists of 1,354 single family homes, and was one of the first neighborhoods in the Los Angeles area to have binding CC&Rs. These regulations strictly limit housing size, style, color, and design along with additional restrictions on landscaping, and are enforced by a review committee.

In recent years, the neighborhood has become a hotspot for mansionization. Despite complying with HOA regulations, many residents believe that the newer and larger houses ruin the feel of the neighborhood, and have been successfully campaigning the Los Angeles City Council for regulations to restrict new home sizes.

The 2000 U.S. census counted 6,080 residents in the 0.79-square-mile Beverlywood neighborhood—an average of 7,654 people per square mile, about average for the city. In 2008, the city estimated that the population had increased to 6,418. The median age for residents was 39, older than the city at large; the percentages of residents aged 35 to 49 and 65 and older were among the county's highest.

The median yearly household income in 2008 dollars was $105,253, a high figure for Los Angeles, and the percentage of households earning $125,000 and up was also considered high for the county. The average household size of 2.5 people was average for Los Angeles. Renters occupied 29.7% of the housing stock and house- or apartment owners held 70.3%.

In 2000 there were 113 families headed by single parents, a low rate for the city and the county. The percentages of veterans who served during World War II or the Korean War were among the county's highest.

In 2015, Novella-T published Los Angeles author Zac Locke's novella entitled, Beverlywood. The novella is set in and around the Beverlywood neighborhood and employs the area as a major character in the story.

All content from Kiddle encyclopedia articles (including the article images and facts) can be freely used under Attribution-ShareAlike license, unless stated otherwise. Cite this article:
Beverlywood, Los Angeles Facts for Kids. Kiddle Encyclopedia.