South Robertson (also referred to as Pico-Robertson) is a neighborhood in the Westside of the city of Los Angeles, California. It is notable for its diversity and being a center for the Jewish community.

According to the Mapping L.A. project of the Los Angeles Times, Pico-Robertson is flanked on the north and northeast by Beverly Hills, on the east by Carthay and Mid-City, on the south by Mid-City, Beverlywood and Cheviot Hills and on the west by Beverly Hills.

Relation of Pico-Robertson to nearby places, not necessarily contiguous:

The 2000 U.S. census counted 18,019 residents in the 1,03-square-mile Pico-Robertson neighborhood—an average of 17,468 people per square mile, among the highest population densities for the city. In 2008, the city estimated that the population had increased to 19,253. The median age for residents was 36, older than the city at large; the percentages of residents aged 19 to 34 and 65 and older were among the county's highest.

The median yearly household income in 2008 dollars was $63,356, an average figure for Los Angeles. The average household size of 2.1 people was low for Los Angeles. Renters occupied 73.1% of the housing stock and house- or apartment owners held 26.9%. 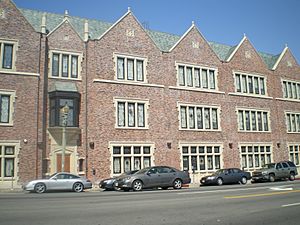 Chabad campus on Pico Blvd. in Pico-Robertson, in a collegiate style reminiscent of Brooklyn, New York

There are several Jewish day schools located in the Pico Robertson area. The Chabad community operates four schools, Bais Chaya Mushka and Bais Chana, both of which are on Pico Boulevard, as well as the newly relocated Cheder Menachem on La Cienega. Yeshiva University High School has campuses on both South Robertson Boulevard and West Pico Boulevard, in the heart of the Pico-Robertson Jewish community.

According to Chabad, the Hasidic movement has eleven centers in the immediate Pico-Robertson area, including the two high schools, boys cheder, day school, six synagogues, and a community center. Minyan Finder reports over twenty synagogues operating in the area.

In 1993, the neighborhood became home to the Los Angeles Museum of Tolerance.

All content from Kiddle encyclopedia articles (including the article images and facts) can be freely used under Attribution-ShareAlike license, unless stated otherwise. Cite this article:
South Robertson, Los Angeles Facts for Kids. Kiddle Encyclopedia.